Big news, big news! Coco and I are going to KCON! Not only are we going to KCON, but we're presenting at KCON! Now that we're all official on the KCON website and stuff, we'll make a more formal announcement about our participation soon. The moral of the story is that if you'll be at KCON, we should meet.

What does KCON have to do with Answer Me 1994, you may ask? Well, one of our panels is about second male leads, so I finally decided to watch this show. You know, for "research."

Much like its predecessor Answer Me 1997, Answer Me 1994 presents a group of longtime friends in the present and then gives us the story of how their friendship progressed from their first year of college to the present day. It also features the same type of husband mystery, where the audience tries to figure out which of two (or three or four) men the female lead (Na Jung, played by Go Ara) will choose in the end. Basically, it's a billion (or 20, whatever) episodes of the writers jerking the audience around between two love options.

Because it's set in the '90s, the show is filled with nostalgic references to Korean pop culture. Some of the references will go over the heads of anyone unfamiliar with 1990s Korea, but some of them, like the millennium hubbub and the switch from pagers to cell phones, are memorable globally.

I know that a lot of people watched this show in comparison to Answer Me 1997, but I think it stands alone as its own show that should be reviewed as such.

I watched this show because I heard that it featured the love triangle to end all love triangles. When this show aired, flame wars between Team Oppa and Team Chilbongie erupted all over the internet. I'm going to make this review as spoiler-free as possible, but I will tell you that I went into the series knowing who Na Jung was going to choose, and I'm pretty sure that it improved the viewing experience for me. I'm not saying you have to know the end in advance, but if you prefer not to rip all of your hair out in frustration, it's something to consider. Just sayin'.

As I watched Answer Me 1994, it hit a really personal chord with me. When I was 19, I found myself falling for a good friend who had always been off-limits. Years later (after I ran away to another country for a while), that man became my husband. When I saw Na Jung and Oppa trying to navigate those awkward moments of transitioning from friendship into romance and from youth into adulthood, it brought me a sweet sense of nostalgia. And yes, that means that I'm a Team Oppa sympathizer. I married the Oppa in my story. I can't help it. 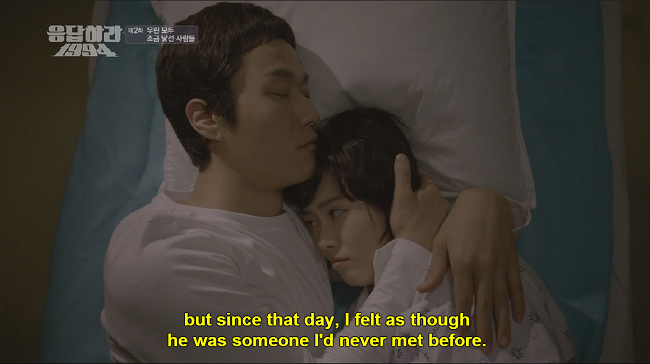 Even though I'm in Oppa's camp, both the best thing and the worst thing about this show is that both men are good choices. Sure, I'm Team Oppa, but I also feel like I'm Team Chilbongie (How's that for being wishy-washy?). They're very different characters, but, unlike other love triangles, it's abundantly clear from he very first episodes that both men care about Na Jung and want to support her. Either one could have a balanced relationship with her that is rooted in friendship.

I say that it's both the best and the worst thing about the show because the structure of the husband mystery does the show an enormous disservice. By creating a frame narrative that constantly forces focus onto the question of who Na Jung will marry, Answer Me 1994 encourages viewers to invest most of their emotional energy into the love triangle. If left alone, I think viewers could have appreciated the natural progression towards the eventual romantic outcome without constantly second-guessing themselves and feeling bad for whichever guy was being left behind at the moment. It also would have spared us the agony of watching the world's most boring housewarming party. Seriously, how freaking long was that wedding video?

Without the framing device, viewers could also enjoy the show as a slice-of-life representation of youth and friendship. In a show where the side characters all have their own stories that endear them to us, it makes little sense to constantly insist that the only outcome that really matters is Na Jung's choice. Even the parents were well-rounded humans with concerns and hopes of their own. Personally, I probably enjoyed watching Haetae more than anyone else, and his progression as a character meant more to me than the romantic tug-of-war.
I do have to complain about Bingrae's treatment at the end, though. It's like they were in a gigantic rush to tie everything together with a neat bow, and in so doing, they undermined the emotional weight of his personal story.

In addition to drawing constant attention to the husband mystery, the show also dragged the love triangle out way too long. If we're talking about expectation and fulfillment, you can't stretch the love triangle for 20 episodes and then expect us to feel okay for the guy she didn't choose. You made us love him, so you give us some closure beyond five minutes in the finale, you monsters!

I know that a lot of people hated the extended episode length (as long as 1 hour 45 minutes for some episodes). While I agree that some scenes were overly bloated, especially towards the end, I think that the length worked in some ways. It allowed the writers to maintain the lifelike feel of the show by placing big moments in the middle of episodes instead of the end. In real life, you don't kiss someone, freeze frame it, and then roll the credits. You have big moments, and then you go back to normal life the next day.

This has little to do with my feelings on the show itself, but every time the love theme came on, I felt like I was listening to a mix of "Lady in Red" and something by Marvin Gaye.


I may not have lived in Korea in the 1990s, but this might just be the most '90s thing about the entire show.

Answer Me 1994 may be too long with a love triangle that drags on until the end of time, but it is also filled with realistic characters who represent youth in love really well. I would recommend spoiling the love triangle before you start so that you can just sit back and enjoy the leisurely, well-acted ride.