Looking Ahead: What Will You Be Watching? 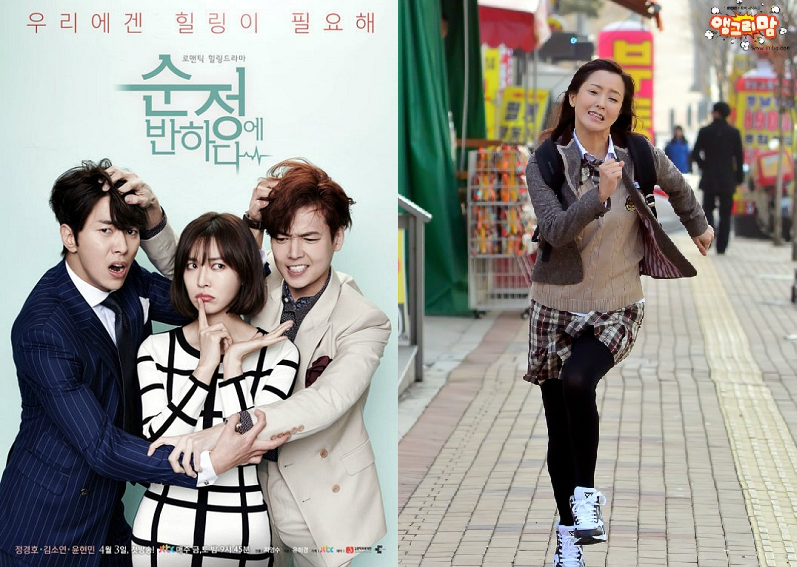 Confession: I started five different dramas this cycle, and I didn't end up sticking with any of them. For some reason, the only one that stuck was Heart to Heart, and even with that one, I'm still four episodes behind. Do you ever have drama cycles like that?

The upside of suddenly becoming insanely fickle is that skipping out on a full round of dramas almost acts like a palate cleanser, and it makes me even more excited for the upcoming shows. Since it feels like every drama for the rest of the year is in the middle of casting right now, I'm extra excited, and I want to know what dramas have caught your eye.

Let's weigh some of our options, shall we?

Premise: A feisty mom (Kim Hee Sun) discovers that her daughter is being bullied, so she goes undercover as a student to get back at the bullies.

Impressions: In no universe would Kim Hee Sun ever pass as a teenager. Also, I'm not sure how I feel about what appears to be a loveline between her and Ji Hyun Woo. So he gets to feel icky for the first half of the series for having a crush on his student, and then he gets to feel icky for the second half of the series when that student turns out to be a married ahjumma? Poor guy.

But then. This trailer.

Ok, so maybe Kim Hee Sun still doesn't look like a teen, but holy moly, she did pretty well. And I have a soft spot in my heart for female leads who love to swear.

Verdict: Probably yes, but only because it premieres two weeks ahead of anything else I want to watch.

Premise: A cold corporate headhunter (Jung Kyung Ho) gets a heart transplant and then finds himself falling for his secretary (Kim So Yeon). They're also in a love triangle with her lifelong best friend (Yoon Hyun Min).

Impressions: I'm in love with the posters and teasers. They're playful and sexy and have Jung Kyung Ho and Yoon Hyun Min on them. What could possibly deter me?

Oh, yeah. The whole "the organ I got from a dead person is still in love with you" thing, which might be my least favorite thing of all the things.

Verdict: Sigh. My heart says yes, but is it only saying that because it came from the dead boyfriend of this drama? This one reeks of "fun romcom turned into a cryfest" from a mile away.

Premise: A cutthroat divorce lawyer (Cho Yeo Jeong) has a prickly relationship with her office manager (Yeon Woo Jin). The tables turn when she loses her job and has to become an office manager for a new lawyer, who happens to be none other than her former employee.

Premiere date: It was going to be March 14, but rumor on the streets has it that it's been pushed back to April?

Verdict: Did I mention that Yeon Woo Jin's last role was in one of my favorite opposites attract romcoms?

Yep, count me in!

Premise: A webtoon artist (Byun Yo Han) writes a story about his four ex-girlfriends. When the webtoon gets picked up by a movie studio, he has to work with a producer (Song Ji Hyo) who just so happens to be one of those exes. Awk-ward!

Initial impressions: Song Ji Hyo and I are going to be best friends someday. In order to make that happen, I have to watch this. You know—to prove my friendship.

5. Descendants of the Sun

Premise: A UN peacekeeping officer (almost 100% certainly played by Song Joong Ki) and a doctor from Doctors Without Borders (Song Hye Gyo is considering) initially don't get along, but then the fall in love because of danger or something.

Initial impressions: I know this is really far away, but I already feel so conflicted. On the one hand, remember how I started my Song Joong Ki obsession right around the time he left for military service? Siggggggh I luff him.

I actually find the premise kind of interesting, and who knows? Kim Eun Sook tends to do better with bigger plots (body swapping in Secret Garden) than she does with basic ones (rich kids go to school in Heirs), so maybe having a background of war will force her to do more than end every episode with a wide-eyed love triangle formation.


My biggest fear, though, is that this potentially intriguing plot will end up with Song Joong Ki and Song Hye Gyo doing a wrist grab stare-down at each other for five minutes while some poor guy's artery is gushing blood right next to them as I shout "MOVE IT, YOU IDIOTS! THAT MAN DOESN'T HAVE TIME FOR YOUR LOVE" at my laptop.

...not that I have ever shouted that at a show before.

I guess we'll just have to wait and see, won't we?

Okay, now it's your turn. What shows are all of you anticipating? I know I missed a bunch of upcoming ones, like Sensory Couple aka Girl Who Sees Smells aka Shin Se Kyung's Got a Fetish for Bizarre Superpowers, but the ones I covered are the ones tugging at my heart (for good or for ill) at the moment. What about you? If there's something else I should consider, by all means, convince me so that we can watch together!