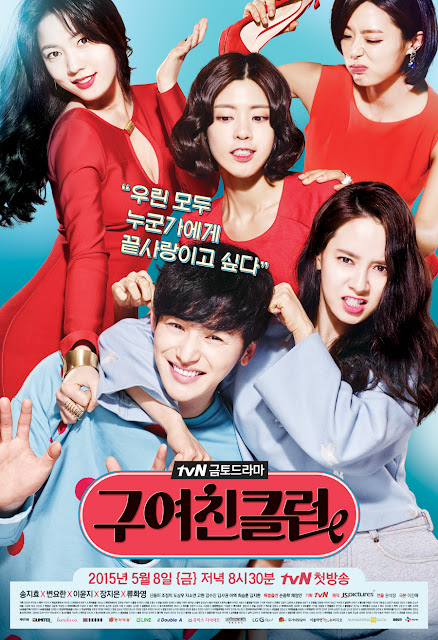 Ex-Girlfriend Club simultaneously makes me excited and furious to review. Excited because, in spite of going up against some major drama heavyweights, it ended up as my favorite summer series so far. Furious because apparently no one in Korea felt the same way, so dismal ratings cut the series short.

Bang Myeong Soo (Byun Yo Han) is a webtoon writer who writes a series about all of his ex-girlfriends. The series gets picked up for a film adaptation by Kim Soo Jin (Song Ji Hyo) and the production company where she works. Of course, Kim Soo Jin happens to be one of Myeong Soo's exes. The three ex-girlfriends who appear in the webtoon (played by Lee Yoon Ji, Jang Ji Eun, and Hwa Young) also show up to make things difficult.

It's hard to talk about this series without first mentioning its cancellation. It was initially scheduled for 16 episodes, but it was cut down to 12 midway because of abysmally low ratings in Korea, even by cable standards.

When I hear that a series has been cut short (especially a series that was only 16 episodes to begin with), it automatically sends up red flags as a viewer. I assume that the entire series is such a hot mess that it needs to be put out of its misery. (Nail Shop Paris immediately comes to mind, though I don't even know if that show was supposed to have more episodes in the first place, and I'm too lazy to Google it.) I also figure that the cancellation probably means that the ending will be a hodgepodge of people scrambling around trying to end things as quickly as possible.

Before I say anything else about this series, let's just make this clear: As far as quality goes, Ex-Girlfriend Club didn't deserve to be cancelled. This was a decision based in money and ratings, pure and simple.

Frankly, this was a refreshing gem of a series, and even though it wasn't the flashiest show out there, I really enjoyed it for what it was. For once, we didn't have a plot that involved rude chaebols or amnesia or any of the other crazy plot devices that are so common to K-dramas. Also, unlike most other dramas where exes reunite, neither one of the leads was a terrible jerk. 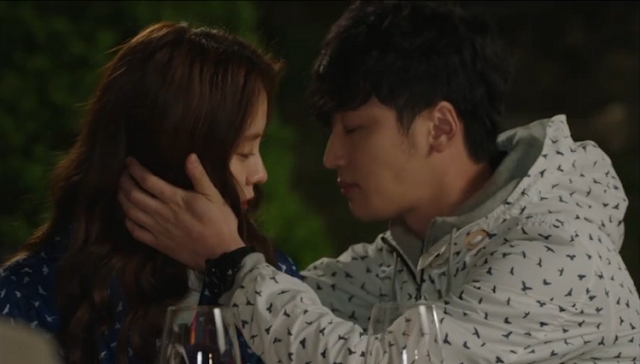 Instead, this was a quiet, surprisingly funny series about two relatively normal, relatively nice people who just didn't work out the first time around. Maybe that's too boring for the average viewer, but I found it immensely refreshing. I loved how the series peeled back the layers of their relationship over time to help us learn why it failed. Every time we think we have the whole story, we get another little piece that changes our perspective on the relationship.

I particularly appreciated how they held back Myeong Soo's side of the story for a while and let us follow along with Soo Jin's assumptions. That's how real relationships often work: we see the faults in others, but we're blind to the hurtful things we do.

I get that dramas thrive on—well—drama, but I really liked the relationship between Myeong Soo and Soo Jin. Byun Yo Han was the perfect choice as the nice-to-a-fault everyman Myeong Soo. He's charming in kind of a goofy way without having the perfect chiseled looks of most K-drama leading men, and it really worked for this role. He and Song Ji Hyo also did an excellent job portraying not only their romantic chemistry, but also their friendship. The way they playfully interacted with each other made me believe that they had been the best of friends for years. 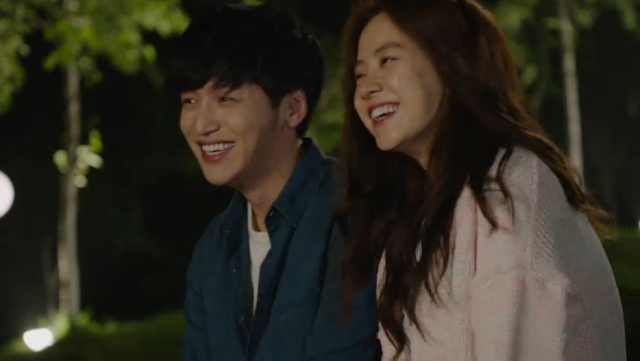 Now, I loooooooooove Song Ji Hyo and want to be her best friend, but I did have a few complaints about Soo Jin as a character. She was great at the beginning of the series or in scenes where she and Myeong Soo interacted alone, but I felt like Soo Jin kind of disappeared in group scenes after a while. I don't know if it was poor writing not giving Song Ji Hyo enough to do or Ji Hyo just defaulting to a blank face every time she didn't have lines, but I found myself confused about Soo Jin's personality for the second half of the series, especially when her only real reactions involved suddenly being cutesy with Myeong Soo.

Just because Soo Jin turned into a bit of a blank slate doesn't mean that there was nothing going on, though. The real draw of this series was the rest of the ex-girlfriend club. Some of the scenes where the entire gang interacted were laugh-out-loud funny, and the progression of their relationship with each other was definitely a highlight in the series. 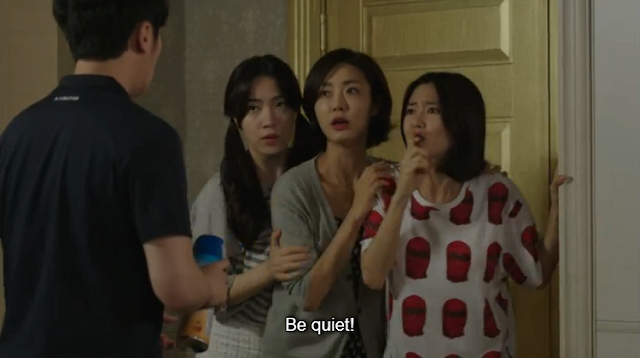 A special shout-out goes to Lee Yoon Ji, who seriously just needs to start being the female lead in every single show ever already because she's amazing and perfect and I can never get enough of her. Too bad she's having a baby and won't be in anything for a while....I mean, YAY for her! (But sad for viewers.) 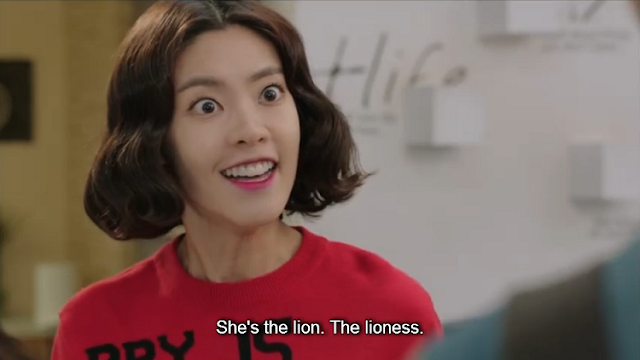 If there's anything the shortened series really made me miss, it was more backstory with the three exes. We got hints about them at the beginning of the series, but I felt like we never fully got past the surface because there was so much initial emphasis on the central romance and then they ran out of time.

So how did the shortened length affect the series? In the overall story arc, I don't think it was terrible. There were a couple of episodes right after the cancellation announcement that seemed directionless and devoid of energy, but I'm happy to report that it picked up again at the end, and the series as a whole remained intact.

Basically, tvN lucked out because if any show could handle being cut, it was this one. The plot wasn't exactly high concept, so it's not like they had to tie up a bunch of loose ends before the conclusion. Frankly, I was a little worried after episode 8 that they wouldn't have a way to fill the remaining episodes without heading to Crazytown, and when I watched the finale, I felt just as satisfied as I do with most drama finales, if not more.

But all of that is beside the principle of the matter, which is that just because tvN could cut episodes without ruining the series doesn't mean they should. I'm a firm believer that series extensions or shortenings should be a function of making the best drama possible, but sadly, that's never the case. Just because I wasn't sure how the writers could fill 8 more episodes doesn't mean that they didn't have a plan. They should have been given the chance to execute their original vision, especially since much, much worse shows get to finish their runs untouched.

Canceling the show sends the message that the whole thing was a failure, and I can't help but feel for everyone involved in the production who put together something decently good, only to get the axe because Korean viewers didn't give them a shot. When I saw how deflated the writing, direction, and acting was in those few episodes after the announcement, I can't help but assume that the news hit them hard.

What makes matters even worse is that tvN didn't even cancel the series in order to push up their next offering (Oh My Ghostess, which admittedly looks Ah-MAZE-ing). Instead, they made the announcement without having a concrete backup plan, essentially sending the message that they would rather air nothing at all than let the series finish its natural course. If that's not a completely undeserved slap in the face, I don't know what is.

If you heard the news about the cancellation and decided to skip this show, I would recommend you reconsider. I, for one, really enjoyed it. It's a perfect light, fluffy watch for anyone who's tired of the endless amnesia, wrist grabs, and wicked stepmothers in dramaland and wants to see some nice, but flawed, people falling in love for a change. 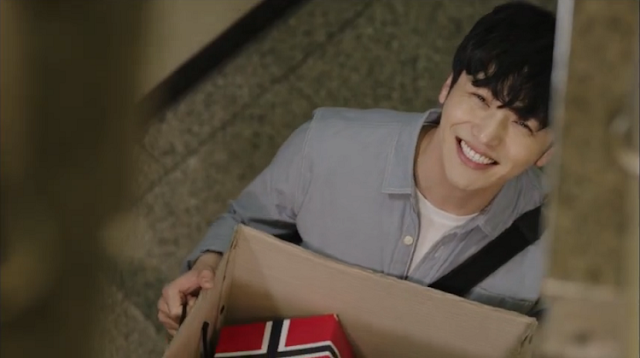 P.S. This drama was also incredibly smart with its music choices. I dare you to watch and see if that "Rose of Sharon" song isn't stuck in your head for days. My personal favorite had to be this little tune, which was used as the perfect romantic tension builder and immediately made me run to Youtube to find it. You know I can't resist an angsty keyboard.

Where to watch Ex-Girlfriend Club: