I have composed this review in my head approximately 11,454,697,239 times, and it still feels like a mammoth undertaking. Maybe it's because Answer Me 1988 was 20 episodes that each ranged from an hour and a half to two hours each. There's so much content to cover that I don't really feel like I can talk about all of it This is why I don't watch long dramas, people!

So, instead of being a responsible blogger and talking about each and every aspect of this show, I'm going to do what I want, which is to rush through the majority of the show so that I can get on my soapbox and vent my very intense feelings about how this series ended. At least I'm giving fair warning, right?


On the whole, Answer Me 1988 was a beautiful, nostalgic, slice-of-life show. While I admit that the production team could have edited some of the scenes more efficiently (less isn't always more), I mostly didn't mind the narrative's leisurely pace or the focus on the mundane.

Instead of the absurd amnesia plot devices, what really drove this series was its heart. Yes, there was a love triangle (and oh boy, I'll get to that in a minute), but really, this series was more about the individual trials of every member of the neighborhood than it was about the puppy love blossoming with the three "main" leads.

I love how, more than any other Answer Me installment, this series was about community, and the adults all had their own lives and trajectories. I often had a hard time choosing a favorite character or storyline. (Cheetah Ahjumma vs. the Bear falling in love? Don't make me choose!) The neighborhood came to life, and the way I resonated with the various narrative threads really made me feel invested in the series. 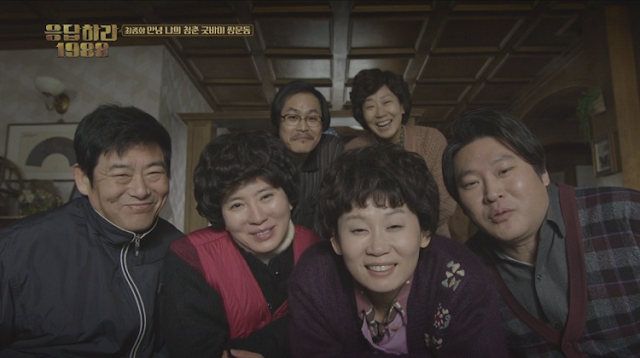 Before the drama began, the writer said that there would be no "husband hunt" this time around, and, if that had been the case, this series would have been practically perfect in every way.

That initial promise ended up being a dirty, dirty lie, and I feel far more trolled than I ever did in the previous Answer Me shows. While the love triangle certainly wasn't front and center for most of the series, the way it was woven into the last few episodes of the drama really made it impossible to ignore and—for me, at least—ended the drama on a bit of a sour note.

SPOILER ALERT—HERE BEGINS VIVI'S ANGRY SOAPBOX, IN WHICH I DISCUSS THE OUTCOME OF THE SERIES. ENTER AT YOUR OWN RISK.

To be perfectly candid before my rant, I was pretty solidly Team Jung Hwan from episode 1, so I was obviously going to be a little disappointed if Taek was the husband. However, I said from the very early episodes that all of the guys had their pros and cons as potential spouse material, so I could have been okay with any outcome.


When I saw the last few episodes of the series, I liked the sweet moments between Deok Sun and Taek, and I loved seeing how tender their relationship is as adults (or the episodes 18-20 version of them, at least). I was completely convinced that they ended up as a perfectly content couple, and I could even see why Deok Sun would choose Taek (something that doesn't always happen when I'm rooting for the guy the female lead doesn't choose). It's also refreshing to see the second male lead type win out every once in a while, and I've seen several dramas where a twist in the endgame romance worked immensely well.

So far, all of these are good things — why, then, was this one of the least-satisfying drama endings I've seen? Frankly, my complaints aren't about the outcome of the romance so much as the handling of the romance. To be honest, it felt as though the writer sold out her narrative for the sake of ratings.


I guess whether or not the last few episodes are satisfying depends on what you enjoy out of a romance. If you're only in it for the surprise, then this drama is probably fantastic, but I, at least, watch romances not to see who gets together, but rather to enjoy seeing how they fall in love. In this series, the writer kept Deok Sun's feelings hidden for so long in order to preserve the mystery that we really didn't get to see much romantic development on her side until the very end of the show.

Similarly, while I get that "future husband" dropped equal clues for Taek and Jung Hwan (though it seems odd that she married Taek only for him to grow up and act like Jung Hwan), the narrative structure itself favored Jung Hwan because it showed us so much romantic development from his perspective.

The perfect example here is the concert in episode 18. This was a pivotal moment not only in Jung Hwan's feelings, but also in Deok Sun and Taek's relationship. But whose perspective do we see? The emotional focus of the scene is on Jung Hwan and his race to declare his feelings.

If Deok Sun/Taek is the romance we should be watching, the scene would have felt much more satisfying if we saw it from Taek's perspective as he leaves the match and races to her (and then we could see Jung Hwan's perspective in a flashback or something). Alternately, we could have seen everything from Deok Sun's view, where we feel her rising disappointment building up until we see her relief at seeing Taek.

When scene after scene focuses on the love triangle from Jung Hwan's lens, of course it's going to feel like a massive letdown when his romance putters out with one of the most beautiful confessions in K-drama history, only to have it turn into a joke that never gets mentioned again. We also distance the audience from Deok Sun and Taek's relationship in order to preserve the mystery, thereby doing all three characters a disservice.


While I would have preferred that Jung Hwan and Taek just talk it out back in 1989, I could have settled for more clear resolution after Jung Hwan's confession. Did you notice that after the confession, Deok Sun and Jung Hwan never make eye contact again for the remaining two episodes (four hours) of the series? Would it have killed them to have a little more closure after six years of one-sided love?

All I wanted was a clear indication that Deok Sun was choosing Taek over Jung Hwan. Some sort of recognition that she knew his confession was sincere would have sufficed. Instead, we get that scene between Jung Hwan and Taek where he's basically saying, "No, no no, good sir, you take her," which makes all this waiting for Deok Sun's feelings seem like a moot point. Sure, she chose Taek, but she also didn't have any other options.

I wanted to see Deok Sun falling for Taek, understand how she felt during their years of separation, watch them announce their relationship to their friends and family, etc., but hanging on to the husband mystery undermined all of that.

I read some fan comments basically arguing that it's Jung Hwan's own fault for being too passive and letting Deok Sun get away, but that makes Deok Sun way too passive for me. So she's only there to be passed around by the male characters? If she's really an active agent in all of this, why not let her know everyone's feelings out in the open so that she can make her own choice? If the only thing keeping Deok Sun and Taek apart was Jung Hwan's passiveness, you clearly didn't have a convincing romance in the first place.

Then, to add salt to the wound, we completely drop Jung Hwan off the face of the planet for the end of the series. Not only does he have zero one-on-one interaction with Deok Sun, but he has a grand total of maybe three minutes of screentime in the entire last episode. Every other Answer Me series gave us glimpses into the future for the entire friend group, but both Jung Hwan and Dong Ryong get ditched in the end. I didn't need to see them getting married, but it's like they didn't even exist.

Again, I read some fan explanations saying that it's natural that Deok Sun and Taek would lose contact with their old friends over time. I've also read people arguing that the romance wasn't the point of the show, so we shouldn't get hung up on the romantic outcome.

Unfortunately, neither gives a satisfactory explanation for the omission. If the series wasn't focused on the romance, then why are the romantic couples suddenly the only ones who matter at the end of the show? It shouldn't make a difference if Deok Sun hangs out with Jung Hwan or not because she wasn't the only main character to begin with. Remember how we totally ignored her POV for five episodes so that you could string our emotions along? Yeah, you can't take that back now. Give me my Dong Ryong! Give me My Jung Hwan! GIVE ME JIN JOO OR GIVE ME DEATH! (Too much? Fiiiine, I'll tone it down.)


Part of me suspects that the writer was worried that keeping Ryu Joon Yeol and his insane on-screen charisma around would be a distraction from the Deok Sun/Taek story, but maybe not. Maybe the writer genuinely believed that the romance was all that mattered all along, and it was the rest of us who were fooled into thinking we were watching a community narrative instead of Deok Sun's Husband Hunt.

Ultimately, I can't help but feel that the writing hurt both the characters and the plot development. The only benefit to some of the narrative choices was keeping people glued to their screens, and that's exactly what happened. With the record-busting ratings for this show, the writer got her reward—at the expense of the ending.

Does a bad ending ruin the show? For this series, I would argue no. The conclusion certainly left me feeling upset and cheated, but there were also so many beautiful community moments woven throughout the drama, including in the last few episodes, that I don't think you can write off the series for the romance. 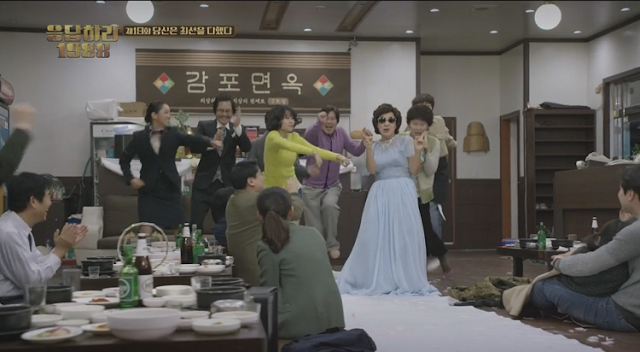