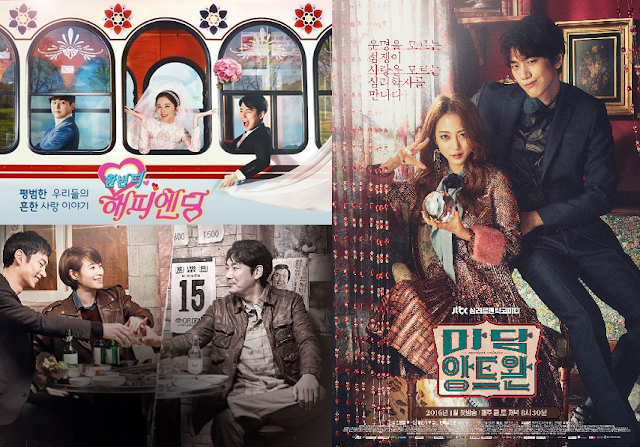 Am I the only one who feels like I'm suddenly drowning in new drama options? Holy smokes! There I was, minding my own business with my new BFF Cheese in the Trap, and suddenly BAM! Four new dramas premiered within one week!

Realistically, there's no way I'm watching more than two dramas at once with maaaaaaybe a third one on the backburner for days when I'm bored, but I did my best to give at least 3/4 shows a fair shot. (Sorry, Neighborhood Hero. Better luck next time!) Writing about that many shows at once is overwhelming, so I'm limiting myself to 3-sentence first impressions—and not James Joyce Ulysses style sentences, either. Let's get to it.

What it's about: Former girl group member Han Mi Mo (Jang Nara) runs a successful matchmaking service for divorced men and women as she tries to find her own second chance at love. Song Soo Hyuk (Jung Kyung Ho) is a tabloid reporter and single dad who finds his path crossing with Mi Mo.

First impressions: The first episode was sexy and fun, and I suddenly discovered that Jung Kyung Ho has a crazy magnetism about him that I can't quite pinpoint. Unfortunately, the romance quickly devolved into yet another humdrum K-drama love triangle of people who magically knew each other as children. If I keep watching, it will be for the core group of girl friends, whose individual stories are far more nuanced and interesting than Mi Mo's sudden crush on her ER doctor.

What it's about: Choi Soo Hyun (Sung Joon), a supposed psychology genius, gets thrown together with psychic Go Hye Rim (Han Ye Seul), who claims to speak to the spirit of Marie Antoinette. After she becomes his employee, he decides to run the least scientifically sound, most unethical experiment in the world by having all three men who work at the office try to win her affections.

First impressions: Ummm, I hate to break it to you, Mr. Stanford PhD, but no peer reviewed journal is going to accept a "study" about you trying to get into your assistant's pants (or designer skirt, as the case may be). Sometimes dramas can get away with a nonsense premise if the lead couple has enough chemistry (Sensory Couple and Oh My Venus come to mind), but considering how often I want to punch Soo Hyun in the face, I'm not exactly tripping over myself to watch the romance. This feels like a sinking ship, and I'm jumping out while I can.

What it's about: Profiler Park Hae Young (Lee Je Hoon) discovers a two-way radio that mysteriously allows him to communicate with a detective from the past (Jo Jin Woong). Together with the help of lead detective Cha Soo Hyun (Kim Hye Soo), they work to solve some of the nation's largest cold cases.

First impressions: Is it appropriate to use a cat with heart eyes emoji for a show about serial killers. Stop watching whichever nonsense romcom you halfheartedly decided to start this week and watch Signal instead. If the rest of the series maintains even a fraction of the writing, directing, and acting trifecta we got in week 1, it will be well worth the watch.

Which new shows are you watching? Are you as bored with the romcoms as I am? Are you as in love with Signal as I am? (If not, is it because you haven't started yet? Because you should probably take care of that.)