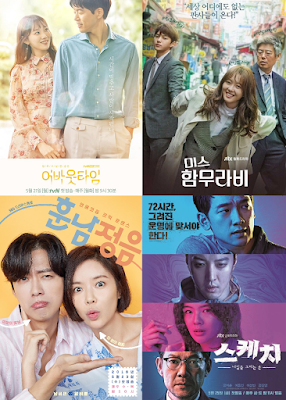 Whew, the new season of K-dramas is in full swing, and I took advantage of a holiday weekend to try out all of the whopping four new shows that aired last week: About Time, Miss Hammurabi, The Undateables, and Sketch.

I won't be able to keep up with all four on top of Greasy Melo (Wok of Love), but I'll give each one a preliminary review. Let's talk about which one had me at the edge of my seat, which ones had me rolling my eyes and reaching for the fast-forward button, and which one turned into a pleasant surprise. 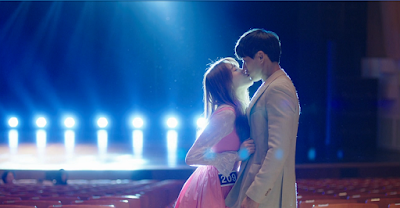 What it's about: Choi Michaela (Lee Sung Kyung) has the ability to see the lifespan clocks of everyone around her. One day, she meets rich heir Lee Do Ha (Lee Sang Yoon), who mysteriously makes Michaela's clock pause whenever he's near her.

First impressions: On paper, this premise sounds interesting. The time clock builds in a unique reason to force closeness between the lead couple (and who doesn't like forced closeness in a romcom?), and it also creates emotional stakes from the very beginning.

Sadly, the show isn't living up to its premise so far. The first few episodes aren't bad, per se, but I found myself constantly checking how much time I had left in each episode—not a great way to start.

Michaela should be the heart of the series, but episode 2 started off with so much secondhand embarrassment that I started to cringe every time she and Lee Do Ha interacted. Episode 3 settled in a little, but there's still something off about the chemistry between our leads. She's too much of a manic pixie dream girl, and he's playing the "love at first sight" trope so straight and serious that it just comes off a little uncomfortable. 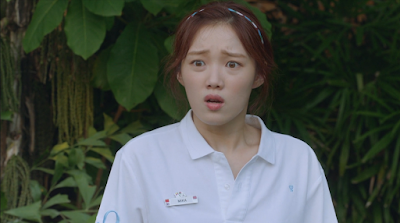 I've seen both Lee Sung Kyung and Lee Sang Yoon spark with other costars, but something about the combo just isn't working—a bad sign for a series firmly rooted in the central romance.

Will I keep watching About Time? I might give it one more episode, but I'm pretty close to letting About Time carry along its merry way without me.

Where to watch About Time: Viki 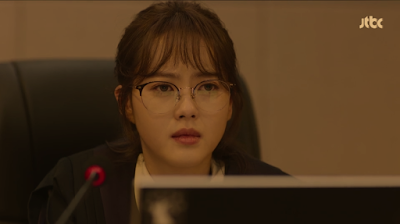 First impressions: Honestly, when I read that Go Ara and L would play babyfaced judges, I was ready to give this drama a hard pass—especially since Judge vs. Judge tanked hard with a very similar premise.

Episode 1 had me pretty worried—Go Ara's Park Cha Oh Reum seemed only a small step away from Judge vs. Judge's Lee Jung Joo's wild courtroom outbursts, and if I couldn't handle complete and total unprofessionalism masked as "passion" in Park Eun Bin, there's pretty much no chance Go Ara could pull it off.

The difference between the two obviously similar dramas is the writing, though. While it's not without its pitfalls, Miss Hammurabi comes from the pen of an actual judge, and it keeps one foot in the real world in a way that Judge vs. Judge never could. We see that Oh Reum's emotional approach isn't always just or without consequence, and that lets me root for her more. (Though I wouldn't be mad if every court case didn't end with everyone in the courtroom sobbing and hugging as what can only be described as Disneyland-ride theme music blares in the background.)

I also admit that the central focus on sexism in the workplace has me more intrigued than cast.

So what about that cast? 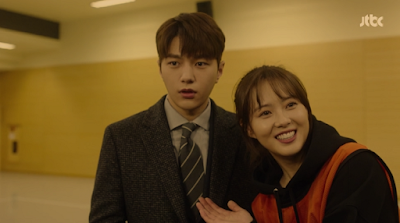 We all know there were plenty of people skeptical of whether Go Ara and L could carry a show on their own, right? I quite liked Go Ara in both Answer Me 1994 and You're All Surrounded, but it did take a few episodes before I bought her character here. She kept saying all the right things, but it's almost like her reactions were a half second delayed and I couldn't quite believe her. She's settling into the role just fine, though, and I like the character of Oh Reum more and more as I see her.

L is...L. I always find him on the bland side (No amount of dimples can fool me!), but at the same time, I think this role suits him well so far (Okay, maybe some amount of dimples can fool me). His character is supposed to be a little stiff, and I think he carries off Ba Reun's awkwardness well. It's hard to make a tough acting assessment on a character who hasn't had to do much so far, and if the writer continues to play to his actors' strengths (and weaknesses), this drama might just work.

Will I keep watching Miss Hammurabi? I'm surprised to say this, but yeah, I definitely will.

Where to watch Miss Hammurabi: DramaFever 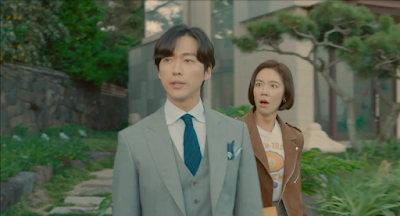 What it's about: Jung Eum (Hwang Jung Eum) is a perpetual dump-ee who works for a dating agency but has trouble finding love for herself. Hoon Nam (Namgoong Min) is some sort of rich, successful guy who becomes entangled with Jung Eum...or something? (Psst I didn't get far enough to figure out the whole plot.) ¯\_(ツ)_/¯

First impressions: Does Hwang Jung Eum have an agent? Because she should fire that person for constantly choosing the exact.same.role.

Will I keep watching The Undateables? That's a hearty nope.

Where to watch The Undateables: Viki 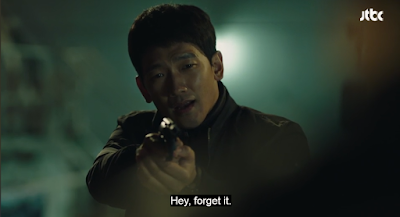 What it's about: Detective Kang Dong Soo (Rain) runs into a detective (Lee Sun Bin) with the special ability to sketch future crimes before they happen. They team up against two villains (Lee Dong Gun and Jung Jin Young) who have the same power to see the future.

First impressions: Very promising so far. This isn't the first crime thriller to combine the elements of rogue cop with a tragic past + supernatural intervention + some charismatic villains. Still, there's something to be said for taking familiar elements and executing them well.

Rain is in his element in this role: he gets to showcase his action skills, and he's a good fit as the rapscallion cop with a soft side. Similarly, Lee Dong Gun and Jung Jin Young will make some compelling baddies—though I'm not completely sold on justice-loving family man Kim Do Jin coldly offing innocents within a 24-hour turnaround.

I made the mistake of watching Sketch alone in the middle of the night, and I found myself clutching blankets and gritting my teeth with nervousness—the hallmark of any solid thriller.

I'm here for the cast, the story, and that intriguing central question of cause and effect.

Will I keep watching Sketch? Admittedly, I have a bad track record with finishing thriller procedurals, but I'm 100% on board for now. This is easily the best start of the whole new batch.

Where to watch Sketch: DramaFever

Which new K-dramas are you watching?

Did you manage to keep up with the influx of new shows? Which ones snagged your attention?