The last post we wrote reminded me that I had been meaning to post another round of Kdrama Hollywood Lookalikes since the first round I did was right at the beginning of this blog.  Some of these might seem kind of random, but they seriously drove me nuts until I figured out why their faces seemed so familiar.  Are k-dramas melting my brain for real, or do these people actually look somewhat similar?

This one feels like a no-brainer to me.  The second Lee Yoon-ji walked onscreen, I thought, "Whoa! Jessica Alba has a Korean twin!"


I also vaguely recall that Jessica Alba was the star of some teen dance movie at some point, so they also have that in common.  This leads me to wonder what would happen if they met in an evil twin dance-off.  Who would win?  Would it break the laws of physics and explode the earth?  I don't know the answers to these things, but I DO know that when it comes to K-pop nemesis dance-offs, you can't do much better than this video.  Go watch it three times in a row, and then we'll get back to this list.


To be fair to Sung Joon, Charlotte Gainsbourg (who was in a version of Jane Eyre, among other things) has a pretty androgynous face, so I'm not necessarily saying he looks like a lady (but maybe a little bit).  Still, I feel like they could be siblings separated at birth.

That being said, the first time I saw My Lovely Sam Soon, I could not for the life of me figure out why Jung Ryeo-won seemed so familiar until I realized that something about the long, windswept hair and the way she carries herself also reminds me of Charlotte Gainsbourg (maybe because I saw a movie with her in it on Netflix not that long ago).

What I'm trying to say here is that if Sung Joon and Jung Ryeo-won had a baby, she would probably star in obscure French films.

Circa 1999, Roswell was the hot new show for teens. Don't remember it?  Well, basically it was about hot angsty teenage aliens in love with hot angsty teenage humans. It was so hard for them to be in love because they came from different worlds.

Sound familiar?  Well, now in 2013 I'm almost done watching Queen In Hyun's Man, which is about--you guessed it--hot young people learning how hard it is to be with someone who comes from a different world.  But the similarities don't stop there!  I spent the first episode of the series pausing my video stream, just trying to figure out why Ji Hyun-woo looked so familiar. It's because his facial expressions are really, really similar to Brendan Fehr's.  The problem is that it has to do more with the way their faces move than anything else, so getting a screen capture at just the right second was impossible.  Just trust me that they're the same, okay?

C'mon. Two lovingly chubby masters of physical comedy who just put a smile on your face. Can you imagine if Jack Black made a cameo on Vampire Prosecutor as an American detective who steals Soon-bum's thunder?  Can you?  I don't know why people don't pay me the big bucks to write these genius scenarios.

I know I already mentioned this one in my Rooftop Prince review, but the comparison (even when they're both in drag!) is uncanny, and I somehow felt like Choi Woo-shik would feel left out if he didn't end up with the other lookalikes, so here it is again! 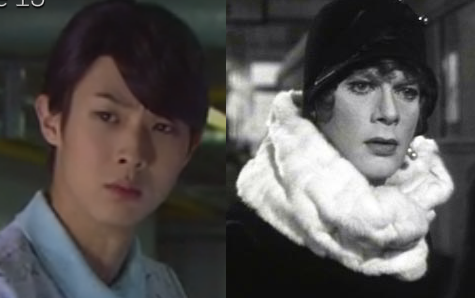 So who did I miss?  What random lookalike connections have you made?