Sometimes, I just don't have the energy to write a full review of something, but I also don't want to completely ignore it.  Instead of leaving these things on my "to review" shelf indefinitely, here are just a few mini reviews of the things I've been watching lately:

AN IMPORTANT PUBLIC SERVICE ANNOUNCEMENT: Song Joong Ki's 2012 film A Werewolf Boy is finally available to stream on Netflix.  Huzzah!  So much rejoicing!

Given my love of Song Joong Ki in both Sungkyunkwan Scandal and Nice Guy, I was just biding my time until I could get my hands on a subtitled version of this film.  Thanks for making all of my dreams come true, Netflix!

General thoughts: I loved it.  Loved it.  LOVED IT.  The premise (a teen girl finds a handsome-but-feral teen boy with secret powers) sounds a lot like Korean Twilight, but aside from superficial plot comparisons (fine, okay, and some runnin' through the woods scenes), they aren't very similar.  Instead, I would call this the summer sibling to Edward Scissorhands.  It's a warm and tender film, and I thought that both Song Joong Ki and Park Bo Young knocked it out of the park as the leads. 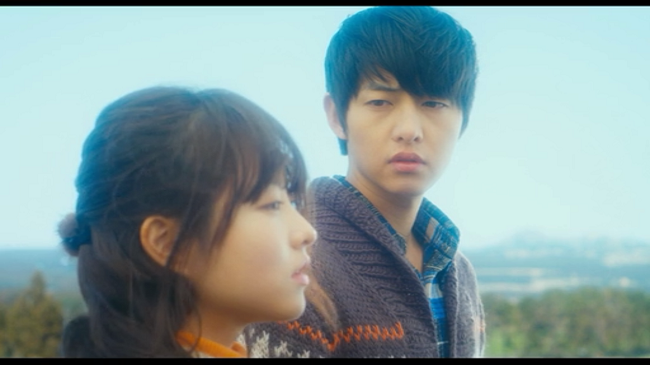 Mini Review 2: Boys Before Friends (aka "the American Boys over Flowers," aka "the end of the world as we know it")

When all the anti-American remake hullabaloo came around, I defended the right to re-adapt Boys over Flowers for an American audience.  I still stand by that assessment, but I never said the outcome was going to be good by any means.  It's currently three episodes into the show, and they're doing it as a live shoot, true Kdrama style, which is kind of cool.  If you want to watch, it's available on Viki and BoysBeforeFriends.com.

General thoughts:  Out of the three available episodes, I have watched exactly one out of sheer curiosity.  I hear that it got less ridiculous after the first episode, but I haven't mustered the will to watch more.

Let's put it this way: I kind of wish that Mystery Science Theater 3000 were still a thing because if any work ever deserved to be mocked by snarky talking robots, it's this one.  It got into "It's so bad, it's good" territory pretty fast.  I was laughing my face off for most of the episode, so that's something, right?  Like when they busted out this Paul Revere hairpiece for a bullying scene:

Or when "Liam" accidentally washed off his ponytail in the shower:

Actually, I feel kind of bad picking on this show.  I think a lot of problems just stemmed from budgetary and time constraints, so it wasn't entirely their fault that it felt kind of like watching someone's school project.  I was rooting for ya, kid!  They also apparently swapped out the lead actress in episode 2, although the original lead kinda grew on me by the end of the only episode I saw.

Oh, and the world didn't end just because a small production company used the general plot to Boys over Flowers in an English-speaking version.  Whew!  What a relief!

This was the only one of the "flower boy" shows that I hadn't seen, and I finally decided to start it one afternoon.  I'm a teeeeeeensy bit embarrassed about how fast I got through the whole thing from start to finish.  Between this and White Christmas, Sung Joon has won me over--which means that I'll probably start I Need Romance 3 pretty soon here (though I'm pretty relieved that he won't be rocking the emo perm this time).

General thoughts: If Dream High had an angry older brother who grew up on the streets (and no, happy-go-lucky street kid Taecyeon doesn't count), it would be this show.  I loved the gritty aesthetic and the realism that they managed to inject into the characters even though it was a pretty typical "sudden rise to fame" band story on the surface.

Even though there was a romance involved here, this show is definitely about friendship more than love.  Frankly, I found the female lead pretty dull (and did anyone else notice how sloooooowly she talked?), but the interactions between the bandmates were a joy to watch.

I also have to just say that the show's theme song was insanely catchy:

My interest in kdrama soundtracks usually ranges from ignoring to clawing off my ears, but every time this one came on in the credits, it made me want to do all kinds of things, like clean the bathrooms or go for a jog or something.  Until, of course, I looked outside and remembered that it's freezing outside and just kept watching kdramas under my warm blankets instead.