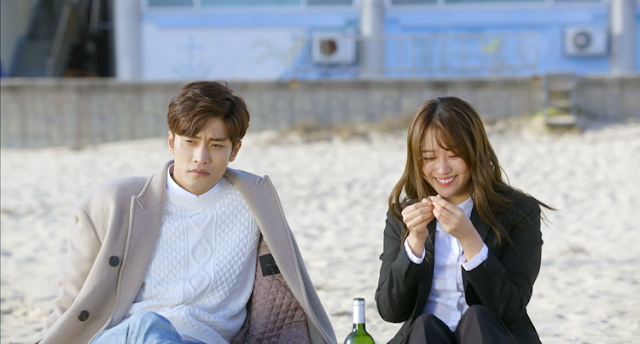 I picked up My Secret Romance, a new romcom starring Sung Hoon and Song Ji Eun, on a whim last night, hoping it would make me feel less annoyed about the incessant rain downpours we've had for what seems like infinity years now.

While this show is complete and utter garbage, it managed to accomplish exactly what I wanted, and it might end up as my new guilty pleasure watch. Be warned—the coming review is 100% about me trying to justify my unrefined taste in TV.

First impressions: I wasn't sure what to expect from a romcom airing on OCN, the cable channel of serial killers, rough-and-tumble cops, and lots and lots of blood. I hadn't seen many trailers for this series, but the stills made it look suuuuuuuper fluffy, like the exact opposite of everything I've ever seen on this station.

If anything, the promo materials were an understatement. This show is like if someone took a ball of cotton candy, stuffed it full of Sweet Tarts, and topped it off with whipped cream. It's cheese with a side of cheese (and not in a great way). The writing is predictable, the dialogue is wooden, and the soundtrack sounds like maybe someone scrounged up a bunch of free audioclips from Windows 97.


Here's the thing, though: I'm not convinced this show needs to be good. If you've ever seen a short web series, you know it can be fun to skip all the character development and just watch a comfortable show that's not trying to be anything grand. Similarly, last year's 1% of Anything remake—which very noticeably comes from the same director as My Secret Romance—started out with a bunch of cliches and managed to be a pretty fun, low-key romance by the end.

Okay, so that's my logical explanation for why I'm watching, but now it's time for my very shameful confession: I just generally find Sung Hoon very easy on the eyes. The man is absurdly handsome, and as much as I fight against the oppa-favoritism trend, I also have to admit that I'm not sad at the prospect of watching 12 hours of Sung Hoon in suits. *Hangs head in shame* I'm only human, okay?

On a more serious note, though, I also think the show hit a couple of small, but critical points really well, especially in terms of consent. Two little moments stand out in the car scene in episode 1. First, when Yoo Mi pushes Jin Wook away while he's kissing her, he immediately backs off, looking both flustered and apologetic. Unlike so many K-dramas, where the male lead kisses an unsuspecting woman until she gives in and enjoys it (blech), he immediately respects her feelings and allows her to make the next move. Similarly, when they're mid-makeout in the car, he stops for a moment to look at her, and she nods explicit consent before they continue.

While it might seem silly to applaud such small moments in a cliche-riddled series like this, those kinds of things make a huge difference to me as a viewer. While I might roll my eyes and shake my head at the "whoops she tripped and he caught her!" trope, an aggressive male lead who doesn't respect boundaries will make me rage quit a series. My Secret Romance did just enough with those scenes to make me feel okay about my inability to stop watching Sung Hoon.

Anyone else in for this guilty pleasure drama? It's going to be 12 episodes of absolute nonsense, but hopefully enjoyable, romantic (plus handsome Sung Hoon) nonsense!