I've been thinking about how to review Radiant Office for a while now. It's a show that doesn't seem to have much buzz among K-drama viewers compared to other recent dramas like The Liar and his Lover (which I didn't like at all and immediately dropped) or Strong Woman Do Bong Soon (in which I liked only the romance). As is sometimes the case in dramaland, this show that no one seems to be watching was infinitely better in nearly every way than either of those shows, and for some reason, I feel like I need to defend this series tooth and nail from anyone who might say otherwise.


Why I Loved Radiant Office

If you take a gander at what other online reviews say about this show, you'll see a smattering of "It's boring" or "The plot doesn't go anywhere" or "There isn't enough romance."

The people who wrote these reviews are not my people.

Sure, at first glance Radiant Office has a lot going against it (that honestly almost made me skip the whole thing entirely). It's yet another office drama with yet another terminal illness plot featuring yet another sad, hardworking heroine with Ha Suk Jin playing yet another rude, powerful male lead.

Dare I say that Radiant Office is my favorite show of 2017 so far? It started off slowly, but this immensely well-written series with its host of well-rounded characters and its charmingly natural central romance sneaked right up on me and captured my heart.

About halfway through this series, I found myself googling the team behind it all, and I wasn't at all surprised to learn that it was both written and directed by women. Unlike so many other shows that abandon the female lead halfway through to focus on the more interesting male lead, Radiant Office never forgot that Eun Ho Won (played to perfection by a radiant Go Ah Sung) was the beating heart of the entire series.


What's perhaps even more impressive is that the drama managed to keep its focus on the female lead while still building out a full cast of characters with their own backstories and cares. There were only one or two truly unlikable villains in the show, and even they had moments to remind us that we might run into people like them at our own jobs. By the end of the show, I cared about way more people in that little office than I ever anticipated at the outset, and I particularly appreciated the way the drama treated all of its female characters and the issues they faced in the workplace.

But What about the Romance?

Under normal K-drama circumstances, I would be furious at a series for taking this long to get to substantial romance. But it works so well in this show. The slow development of feelings between Ho Won and Woo Jin is completely natural and true to character for these two. I found myself squealing in delight at any little glance or interaction between them far more than I normally do for over-the-top romantic gestures in other shows (My Secret Romance, I'm side-eyeing you here).

As it turns out, the male lead wasn't exactly the character I initially expected him to be, and that really worked in the romance's favor. There's something immensely satisfying about watching two characters grow from dislike to trust to friendship to love, and the many scenes of them enjoying just talking to each other made their eventual romance make way more sense than 99% of K-drama couples. Besides, how can you not swoon for a guy who puts his own ego aside and encourages the female lead to break the glass ceiling and become the CEO?

I really, really, really appreciate this show so much that it's hard for me to find fault, but I guesssss there are a few things to discuss.

There were a few slow episodes in the middle where the office politics could have given way to give the finale more time. To be honest, the last episode was mostly satisfying, but it did feel a little rushed.

I lovelovelovelove Do Ki Taek (played be Lee Dong Hwi), but I didn't love how they handled his illness. From the beginning, I thought it would be cheating if Ho Won wasn't ill and no one else was, either. I think having the cancer apply to someone in the Suicide Squad was smart writing, but the way it played out was far too rushed. I don't mind an open ending to his story, but for what a major character he was, dropping that bomb right at the end of the series felt emotionally manipulative. (How much did you love Ha Ji Na's growth, though?)

Similarly, Kang Ho felt like he got the least screen time and development out of the central trio. Sure, he learned to have a backbone, but I think we could have spent a little more time with him in the middle episodes.

(And I wouldn't have complained if we got a better kiss between our leads at the end....)

All of these are minor quibbles, though, and they can't really dampen my enjoyment of this series.

Radiant Office isn't going to be for everyone. It isn't flashy or exciting all the time. But it does have a lot of heart, solid writing, a supportive romance, interesting characters, and a fiery leading lady holding the whole thing together.

If you're anything like me, there's not much more you could ask for. 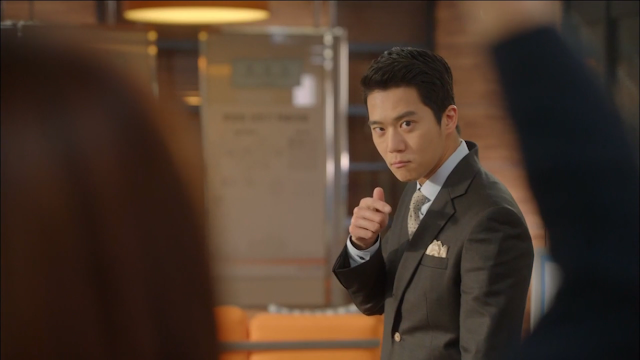