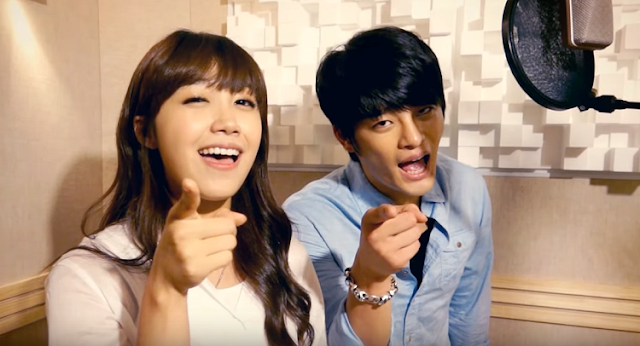 When I first started watching K-dramas, the soundtracks were one of the things that took a lot of getting used to. Many viewers come to K-dramas by way of K-pop, but I wasn't one of them, and the upbeat bubblegum pop and prom-theme ballads seemed pretty over the top at first. Of course, with Boys over Flowers being one of the very first dramas I ever watched, I also suffered from having "Almost PAAAAAAARADIIIIIIISE" stuck in my head on repeat for several weeks. (Definitely memorable, but not in a good way.)

All that being said, drama OSTs (original soundtracks) have grown on me over time, and there are some that really hit the nail on the head in terms of setting the right mood at just the right moment. For me, these are the 10 best K-drama OST songs of all time—the ones that really worked for the dramas they were in and that I didn't mind hearing over and over throughout the series.

Confession: I have a complete and utter weakness for the combination of angsty guitar plus falsetto. As a result, Nell's "Run" was the very first K-drama OST single I went out of my way to hunt down. Thank you, Two Weeks, for introducing me to the magic that is Nell and Kim Jong Wan's voice. Now it's gotten to the point where I heard a few bars of the most recent OST release for Suspicious Partner and knew right away it had to be Nell.


Admittedly, "Touch Love" makes me feel just a teensy weensy bit like I should be shuffling around at prom, avoiding making eye contact with my teen crush, but this song IS The Master's Sun. It's the perfect example of why Yoon Mirae is one of the ultimate OST queens—whatever she touches becomes inextricably tied to the drama in a way that doesn't make your ears bleed. Her latest ballad, "Sky" from The Best Hit, is yet another winner, though it's not quite "Touch Love" levels of iconic—yet.

3. "Wake Up" by Eye Candy, Shut Up Flower Boy Band


Pro tip: "Wake Up" is great bathroom-cleaning music. It's also the perfect song for the fake band in Shut Up Flower Boy Band. They have youthful feelings that they can only express through song, okay?

Most K-dramas use the same songs over and over and over (and over and over...) until you're ready to put your TV on mute every time it plays. Ex-Girlfriend Club played its cards perfectly with a single-use song, using Vodka Rain's "Dreamlike" to build up to the romantic climax of the series. This perfectly timed song proves that when it comes to the best OSTs, less really is more.


Coffee Prince was my very first K-drama, so I didn't fully appreciate the music until I saw other shows with soundtracks I enjoyed much less. Even years after first hearing it, "Sad Song" immediately evokes the melancholy of the scenes where it appears—just what a good OST should do.


Another Oh Hae Young had a smart, effective soundtrack all around, and I can't help but wonder if putting such an emphasis on how the male lead listens to anything and everything around him encouraged the production team to take care of the sound details. Of the entire OST, Ben's "Like a Dream" is the one that immediately reminds me of this series, and that's why it nabbed a spot among the best K-drama songs.

The Answer Me series is great at evoking a sense of the time period with its musical choices, and Oh Hyuk's rendition of Lee Moon Se's "A Little Girl" is a perfect example of a song that knows what show it's in and matches perfectly. If you really want to go down the musical Answer Me rabbit hole, though, the winner has got to be Answer Me 1994's "To You," which went straight '90s with the synth intro and the sexy saxophone/sultry mumbling in the background. Compared to that, "A Little Girl" is definitely on the subtle side of things.

If pretty much anyone other than Eunji and Seo In Guk had sung this song, I would have tossed it directly into the "way too cheesy ballad" pile, but I really can't resist the charm of these two, and the fact that they're singing a duet about their characters' romance on the show is so incredibly adorable that even watching the music video makes me want to go rewatch the entire series from episode 1.

My guess is everyone has a guilty pleasure OST that they find absurdly catchy in spite of themselves, and Dream High is mine. It's a sentimental favorite because I watched this series while grading hundreds of student papers during finals week, and I distinctly remember closing my office door and watching episodes of Dream High as a reward between piles of papers. The dancing and singing kids of Kirin Art School got me through that week, and therefore I succumb to the unapologetic cheeriness of this song.

It kind of blows my mind that "Stay with Me" has 78 million views on YouTube (Chanyeol fans don't mess around, do they?), but I do have to admit that I like the atmosphere of this song, and it was one of the things that drew me into the first few episodes of Goblin. It matched the mood of Goblin without having to go full-fledged belted ballad like so many other top OST tracks (like My Love from Another Star's "My Destiny," for example). It stays in your head, but not in an "Almost Paradise" kind of way.

And now, for a bonus instrumental track: the whistling song from Cheer Up. While not something I would go out of my way to listen to, the second I hear any portion of this song, I start whistling along and wondering why I'm not watching Cheer Up over and over and over. It's the perfect little tune for a happy little show.

These just so happen to be some of the songs I found most effective in their respective dramas, but what about you? Do the big ballads get your tears flowing? Are you more into instrumental themes? Let me know in the comments!