You know that feeling when you're watching a movie, and you suddenly know that actor reminds you of someone, but you just can't figure out who it is?  I have that feeling all the time while watching Korean dramas.  Sometimes they remind me of my second grade crush or my old piano teacher, but sometimes the actors look like a Korean version of actors in Hollywood movies. Because I'm so nice, I'm going to share my discoveries with you.  For some of them, I might save you the trouble of having to google "so-and-so looks like..." in hopes of resolving the unsettling feeling that you've seen that face before.  For others, I might be the only person on the planet who sees the similarity, but I will defend these connections to the death.

Interestingly enough, I'm not the first person to make this comparison.  Apparently, an Italian magazine did a "which one is hotter" segment comparing these two, which seems redundant because they basically look the same to me.

2. Kim Jeong-hoon (Princess Hours) and a bunch of ladies

This one was pretty tricky to figure out.  Every time Prince Yul smiled, I had the vague impression that I had seen it before in some really pleasant Hollywood romcom.  Fortunately (or unfortunately), Princess Hours is ten million hours long, so I had plenty of time to scrutinize his face before it finally dawned on me in a flash: Kim Jeong-hoon smiles exactly like Ginnifer Goodwin (no wonder visions of a shy girl in a cardigan kept floating around in my head as I tried to piece things together!), and he also bears a pretty solid resemblance to Mae Whitman.  Don't believe me?  See for yourself!


Now that I think about it, I think that I should write a screenplay in which Ginnifer Goodwin is the responsible older sister to Mae Whitman's rebellious one.  Ginnifer takes care of them both because they're orphans, but THEN the half-Korean half-brother they never knew they had shows up in their lives to turn things upside down!  There is a hilarious scene of cultural confusion at a carnival, and maybe a montage of them fixing up a house that they can all share. It all ends with someone (any one of the three will do) falling in love with Michael Vartan.  I will accept my millions of dollars for this idea in cash, please!

3. Jang Keun Suk (You Are Beautiful) and Criss Angel


Get it?  One of them uses the last name Angel, and the other acts as a member of the band A.N.JELL.  It's like this comparison was just waiting to happen.  Now, admittedly, the similarity here owes more to emo-swoop hair and bizarre styling than anything else, but it's still pretty distracting until Tae Kyung gets his (not much better, and possibly worse) makeover a few episodes into the series.

I am shocked--shocked, I tell you, that if you google "Korean Harry Potter," the character of Min Jae Ha doesn't even show up on the first page of image results.  Maybe it's because this character (spoiler alert!)appears, becomes a love interest, almost kills a main character, sets up a ransom situation, and disappears all within two-ish episodes.  In spite of the fact that he was there purely as a plot extension, I kept expecting him to pull out a broom and invite Jan Di to play some Quidditch.

So, what's the verdict?  Do you agree?  Am I totally crazy?  What Kdrama Hollywood lookalikes have you noticed? 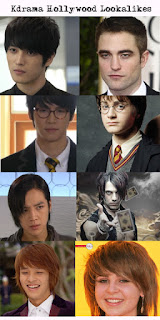