I'm someone who gets bored really easily after the couple initially gets together in Korean dramas. (Why do the parents suddenly want to kick him out of the company?  How did she JUST decide that she wants to go study abroad for two years?  Do we really need some new plot twist about an unexpected half-sibling in a random three-episode arc?)  That's why taking on a 31-episode drama like Queen of Reversals was a monumental step for me.  That's almost twice as long as my preferred 16-episode series length.  Prior to QoR, the only other long-ish drama I had watched was Goong/Princess Hours, which clocked in at a solid 26 episodes.  Considering that at least 10 episodes in the middle were made up of some montage of the evil ex-queen lady looking devious, the grandma being startled at a new scandal, and Yoon Eun-hye staring into space, obnoxiously crying, and/or being socially awkward, I was a little nervous to try another lengthy series.

The only reason I was able to even start this series was because I read a spoiler about the ending ahead of time.  I'm going to go ahead and assume that spoilers will help other people get through, so don't even bother reading if you don't want to know what happens! Also, I'm giving advance warning that this post will be long--because the series itself is absurdly long.

This series follows Hwang Tae-hee, ice-cold power female extraordinaire, as she falls in love, gets married, falls out of love, gets divorced, and finally pulls her life together.  This is going to sound absurdly cheesy, but more than that, it's a show about second chances and learning to change. (Yeah, that sounds even cheesier now that I type it, but I'm standing by it!  People change! Personal growth!  Hope for the future! Hold hands and sing!) Hwang Tae-hee may be the title character, but maybe a better title would have been Office of Reversals because the show is really about all of the characters turning their lives around. Even the minor co-workers had a chance to really grow before the last episode, and the process was endearing to watch.  If you don't connect with Tae-hee, you will at least connect with someone by the end.

One of the major selling points for me going into this series was that the second male lead becomes the first male lead halfway through. Yeah, you heard right--THE SECOND MALE LEAD GETS THE GIRL.  Now, lest the plot stray too far from k-drama-dom, the second male lead also happens to be a rich chaebol's son with a tragic past that prevents him from initially connecting with people.  Blah, blah blah. You know how it goes.

My one complaint about this character was their first kiss.  I know that it was supposed to be passionate and spur-of-the-moment, but if you slap a man for putting the moves on you and then he kisses you again, he deserves a swift kick to the groin, not a spinning camera of romance.  I don't care HOW rich he is.


The Length: Worth It?

As I indicated by my weird love of A Gentleman's Dignity, I'm kind of a sucker for shows that just show normal life.  Just like that one, this one was filled with adults doing regular ole adult-y things. With the exception of the Cruella deVille boss who loves to hold grudges almost as much as she loves to wear absurd red lipstick, the characters are all the kinds of people you could meet in real life.

The major advantage of the 31-episode format is that they really get to dig into the depths of the relationships in a way that I don't think I've ever seen on a television show or movie. At the beginning of the series, I thought there was no way I would be okay with the divorce; then I thought there was no way my heart wouldn't be broken for Joon-soo in the end; then I thought there was  no way I would be remotely okay if Baek Yeo-jin won her man. Every single time, my feelings changed as gradually as the characters' did, and suddenly I found myself understanding why they made the choices they did. When most shows milk divorce for some quick tears, this one really really broke my heart, and I appreciated the gravity that it gave to something that shouldn't really be an easy plot ploy.

The second advantage to the length is tied to the first one: the extended format lets the male actors really shine with subtle, gradual character development.  I already knew that Park Si-hoo was a solid actor from Prosecutor Princess, but I have to say that Jung Joon-ho as Bong Joon-soo really stole the show for me.  He played that character with an amazing empathy that really pulled the series together.  I thought I would hate him, and I ended up feeling more connected to him than to anyone else.

I'm sorry to say it, but the women were seriously lagging behind the men in this drama as far as acting goes.  Chae Jung Ahn only really has three faces in any series I have ever seen her in (flirtatious, perturbed/scheming, and crying), and while Kim Nam Joo did pretty well, her surprised face could really use some work.

Now, this isn't to say that the show didn't get draggy over 31 episodes.  In fact, I chose one or two subplots that I fast forwarded entirely and didn't feel the least bit guilty over it.  For me, it was everything with Goo Yong-shik's mom.  I know that it was supposed to add this whole element of emotion to his character, but I could tell where it was headed from the beginning.  Here's my pro tip: fast forward until the last 10 seconds of every scene and you'll get the entire gist without the long, dramatic pauses.  Kdramas love to repeat important stuff at the end of the scene.  They also love to do flashbacks for really important stuff, so you really won't miss anything.

Because of the workplace setting, you'll also notice a lot of repeated plot elements over. and over. and over.  (Oh?  Need some tension?  How about a high-stakes PRESENTATION?  What?  The bad guys sabotaged it?  How shocking!)  The business atmosphere also allows for ten million angsty elevator scenes.  You know the ones--the doors slooooooowly close (and they usually show this happening from four camera angles) as the leads stare at each other.  Yeah, that happens about once every episode. 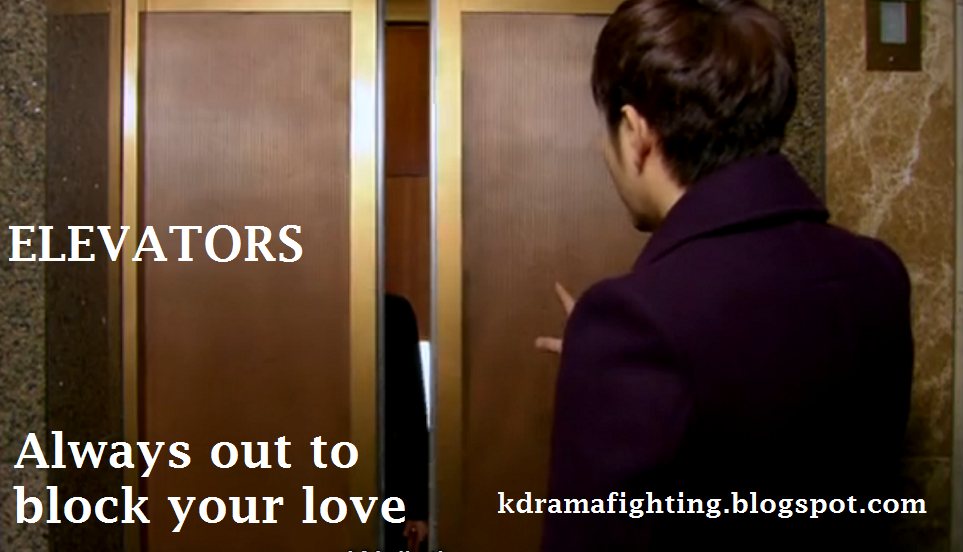 Overall, I had my highs and lows of this show. I couldn't speed through it and sometimes I didn't think I could make it to the last episode, but it had some really strong emotional pulls that make it worth it for those brave souls who aren't afraid to use the fast forward button like a champ.