The Good, The Bad, The Ugly: Playful Kiss Review 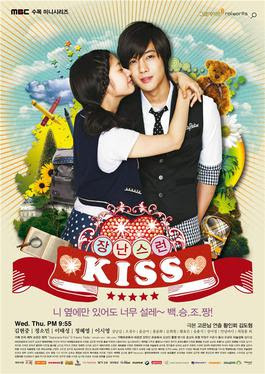 I have a major love/hate relationship with the Korean Drama, Playful Kiss. Before I delve into the negative aspects, let me just tell you that despite hating its overall message, I was completely enthralled, couldn't stop watching, and actually finished it to the end. So, here is the good, the bad, and the ugly in Playful Kiss. I'll let you be the final judge for yourself.


This drama was rarely boring. It had a whimsical feel at the beginning that I really enjoyed, and kept a light hearted and fun mood throughout. The characters were funny and entertaining. The female lead, Oh Ha Ni, is played by the beautiful and charming, Jung So-min. The male lead, Baek Seung Jo is played by the kdrama hotty, Kim Hyun-joong. They had pretty great chemistry and I really wanted to see them fall in love and have a healthy, caring relationship.

The side characters were endearing and had their own interesting little stories, like good kdrama side characters should. I particularly loved Seung Jo's mother. She was hilarious and over-the-top, yet adorable. I can only hope my future mother in-law will be as great as her. She is pretty much the farthest thing from your typical kdrama matriarch.


The love triangle was believable, and the female rival was totally gorgeous and hate-able, like a good kdrama female villain should be. The story kept me engaged and wanting more at the end of every episode, and even at the end of the series.


Unlike most kdramas, I can explain the plot in one sentence: Playful Kiss is about a simpleminded high school girl whose sole ambition in life is to be with an arrogant, hot guy who despises her but eventually tolerates and loves her. That's it. I kept waiting for there to be more, but nothing. No real character growth for anyone. Oh Ha Ni is likable and pure hearted, which somewhat makes up for her simplemindedness, but she never has any pride or self respect when others put her down. This is so unlike typical kdrama female leads, who I love for their spunk and back bones.

I had so little respect for Oh Ha Ni for never standing up for herself that I actually had a really hard time understanding why the male lead ended up with her rather than the smart and beautiful, but evil, female in the love triangle. They seemed like a better match. That should not happen in a kdrama! I really thought that eventually Oh Ha Ni would gain her own dream and be empowered, but no. She claimed that her only dream in life was to follow Baek Seung Jo wherever he went. I had a glimmer of hope when she finally decided to apply herself to become a nurse, but it was only because he was becoming a doctor. At literally the last minute of the series, Oh Ha Ni seems to find her own motivation to become a nurse, but it was too little, too late for me.

Even worse, Baek Seung Jo was just plain mean and condescending to Oh Ha Ni the whole time. Most kdrama guys start out mean and arrogant, but they usually learn and grow and have a change of heart. This just never happened for him, so it made it hard for me to like him. I missed the old Kim Hyun-joong from the his Boys Over Flowers Days. This character was about as completely opposite from Yoon Ji-hoo as you can get. I'm not going to lie and say that he wasn't attractive at all in this drama. Every time he actually decided to be nice and flashed one of his cute smiles, I was suckered into liking him. 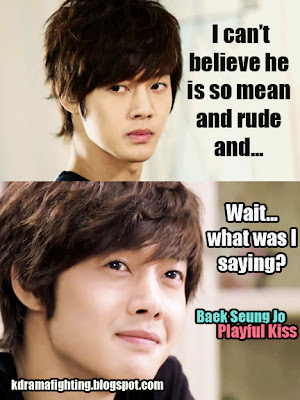 But him smiling was pretty rare, and definitely did not counteract their emotionally abusive relationship. He treated her like a child, and she seemed insecure of his love for her even after they were married.

This being said, remember that Playful Kiss was one of those dramas that I could not stop watching against my better judgment. You could say I had an abusive relationship with Playful Kiss. I really loved it while I was watching it because I kept thinking it would change. Every time it did a little, I forgave it and fell back in love, but in the end it had never really changed deep down. My best advice for Playful Kiss is to only watch it if you can look past the sexist, unempowering to women message, and the lack of character growth, and just sit back and be entertained by cute, funny actors. I'm glad I watched it because it's one of those dramas I love to hate.