I'm just going to get this out there from the very beginning: the main couple in History of a Salaryman never kisses--not even once.  If you can handle that and want to know why you should probably watch this show anyway, keep reading.  If you can't handle it, feel free to stop reading and browse facebook now.  If you're angry at me for spoiling it, I apologize.  I felt like you had a right to know!

Okay, so the main couple never kisses, but that's because this show isn't really a romance.  It's a satire, and a pretty decent one at that.  It's stuffed to the brim with kdrama cliches, but it winks at them just enough to get away with it.  I knew almost nothing about this show when I started to watch it, so the fact that it was simultaneously exactly like and yet strangely different from other dramas kind of threw me for a loop at first.  I wasn't always sure how I felt about it, but for the most part, it was clever and fun.

In the second half of the show, the writers seemed to lose sight of the satire and bought into the melodramatic kdrama cliches a little too seriously.  To me, those moments were the weakest parts of the show. In fact, I think that this is one of the rare kdramas that might have worked better as a shorter recurring series, kind of like Vampire Prosecutor.  They basically split the drama in half in terms of the central conflict, anyway.  The first half dealt with the murder, and the second half switched to Mo Ga Bi and her crazy ability to seduce every single male on the planet. With two shorter shows instead of one long one, they could have included some more satire into the second part to give it better pacing without ruining the narrative buildup.

The drama's biggest strength, in contrast, was in the details.  Like Cha Woo Hee riding around the lab on a Segway.  Or the Oldboy references sprinkled throughout the homeless sequence.  Or the grandpa's toupee. It's all in the little things, ya know?

A word to the wise: Most of the time, I like to skip the previews at the end of each episode because I don't like to ruin the surprise.  For this series, it's worth it.  Each episode has an extra little scene at the end, and sometimes they reference these scenes in future episodes.

As I said, I knew almost nothing about this show before I watched it.  I actually chose it because Orion recommended it as an example of a capable female lead with a backbone and an unapologetic attitude.  Orion wasn't wrong.  I didn't exactly love Jung Ryeo Won in My Lovely Sam Soon (I know, she had cancer, but still.  I'm a monster.), but she killed it in History of a Salaryman.  Her character didn't take crap from anyone, and when everyone underestimated her (including the male lead), she used their lack of faith to her advantage.  I love that.  She was ridiculous and selfish and mean, and yet she didn't cross over into becoming cartoonish, which can sometimes happen with these kinds of female characters (*cough*My Fair Lady*cough*).

Even though she became softer and more human as the series progressed, I also appreciate that they didn't completely snuff out her personality. I sometimes get tired of heroines whose only apparent faults are a lack of fashion sense or being too shy.  Baek Yeo Chi wasn't a perfect person by any stretch of the imagination, but her nasty temper and her penchant for swearing only made me like her more.

I wasn't quite as sold on Lee Bum Soo as Yoo Bang.  Correction: Lee Bum Soo played the part just how it was meant to be.  It was Yoo Bang in general that got on my nerves a bit.  He's a great person and all, but his laugh drives me a teensy bit crazy.  He seems like the kind of guy who you don't want to invite to dinner parties because he takes every joke just a little too far. 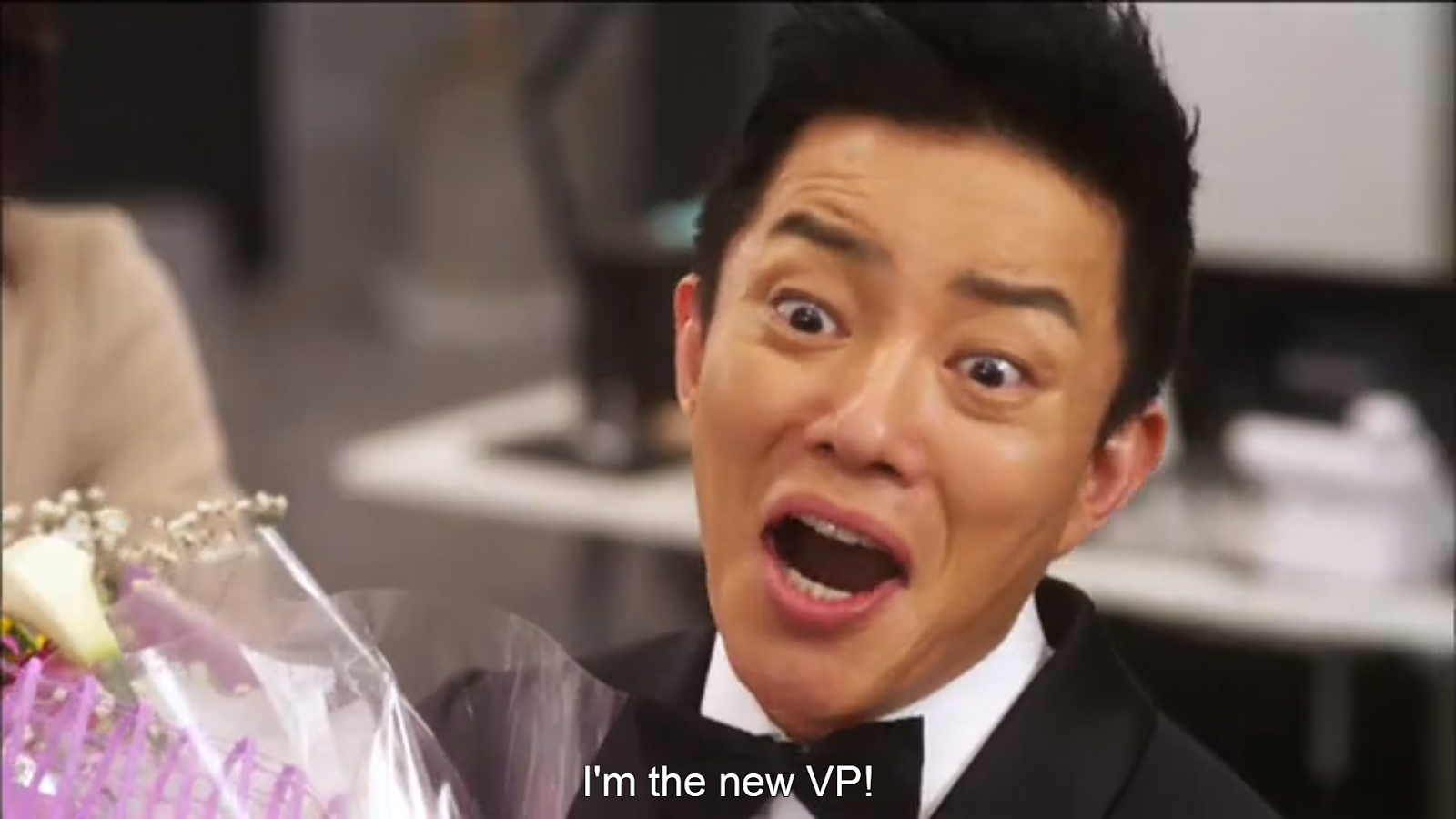 Maybe that's why the romance between these leads took a back seat to the rest of the story.  For a while, it felt like the plot might have worked better if the four primary leads swapped their love interests.  Yoo Bang really understood Woo Hee in a way that Hang Woo didn't (more on that in a bit), and a Baek Yeo Chi/Hang Woo romance would have been hilarious to watch.  That being said, I'm actually glad that things worked out the way they did.  It was nice to see Baek Yeo Chi and Yoo Bang flirting and hugging without the awkwardness that you often see in kdramas.  At some point, their friendship turned into romance, and I strangely didn't feel all that disappointed that we missed the big moment of confession because these two characters aren't the overly dramatic type, anyway. That's not to say that this show was entirely devoid of romance.  The other end of our love square (Woo Hee and Hang Woo) was constantly building a romantic relationship through cute little scenes. Here's the problem, though: I can't help but wonder why on earth Woo Hee wants to date Hang Woo.  I mean, she's a smart, capable, attractive scientist.  Sure, Hang Woo is handsome and powerful and sometimes carries her home drunk (BUT ALSO SOMETIMES ROOFIES HER), but...he also has the personality of a dishrag.

There, I said it.

All Hang Woo did for 95% of the series was glare handsomely at the camera.  Seriously, if there were a drinking game about all of the situations where Hang Woo does nothing but glare, every viewer would be drunk enough to get a piggyback ride home by the end of episode 2.  Here's just a minor sampling:


To make matters worse, Hang Woo and Woo Hee never have an actual meaningful conversation until AFTER he proposes marriage (which, I must say, was an even lazier proposal than the one in Secret Garden, and I'm glad that Woo Hee didn't entirely let him off the hook for it).  If you're keeping track, you'll notice that Hang Woo only pays attention to Woo Hee if less than 20% of her body is covered in clothing, if other men are ogling her, if she is so drunk that she's incapacitated, or some combination of the above factors.  To be fair, Woo Hee has her own share of faults and doesn't always let him get away with his games, but you have to wonder why she bothers in the first place.

And now a small piece of advice from Vivi's Dating Corner:

If a guy consistently acts like a total dirtbag and you see him not only trying to ruin your friends' lives but also doing things like smiling when little old ladies get dragged off by his hired thugs, THAT'S A DEALBREAKER.  And no, being nice for five minutes at the end of 22 episodes doesn't make up for it.