It feels like we've been hearing nothing but Heirs updates from the kdrama world for months now.  Lee Min Ho and Park Shin Hye in one show together! *head explodes* Even though the premise of teenagers in love has us a little skeptical, we couldn't let such a massive occasion pass by unnoticed, so we decided to live blog it, Oscars style.

You know how style journalists write commentary on awards shows as they're airing? Things like "Ooooh that dress looks like she wrapped herself in seaweed and crawled out of the ocean!" (I don't know anything about fashion actually. Is that what style journalists say?)  That's what we did here.  We watched the Heirs premiere and just wrote whatever came to mind.  It isn't the most in-depth commentary (for that, check out my drama club review on DramaFever over the weekend), but it was fun for us! 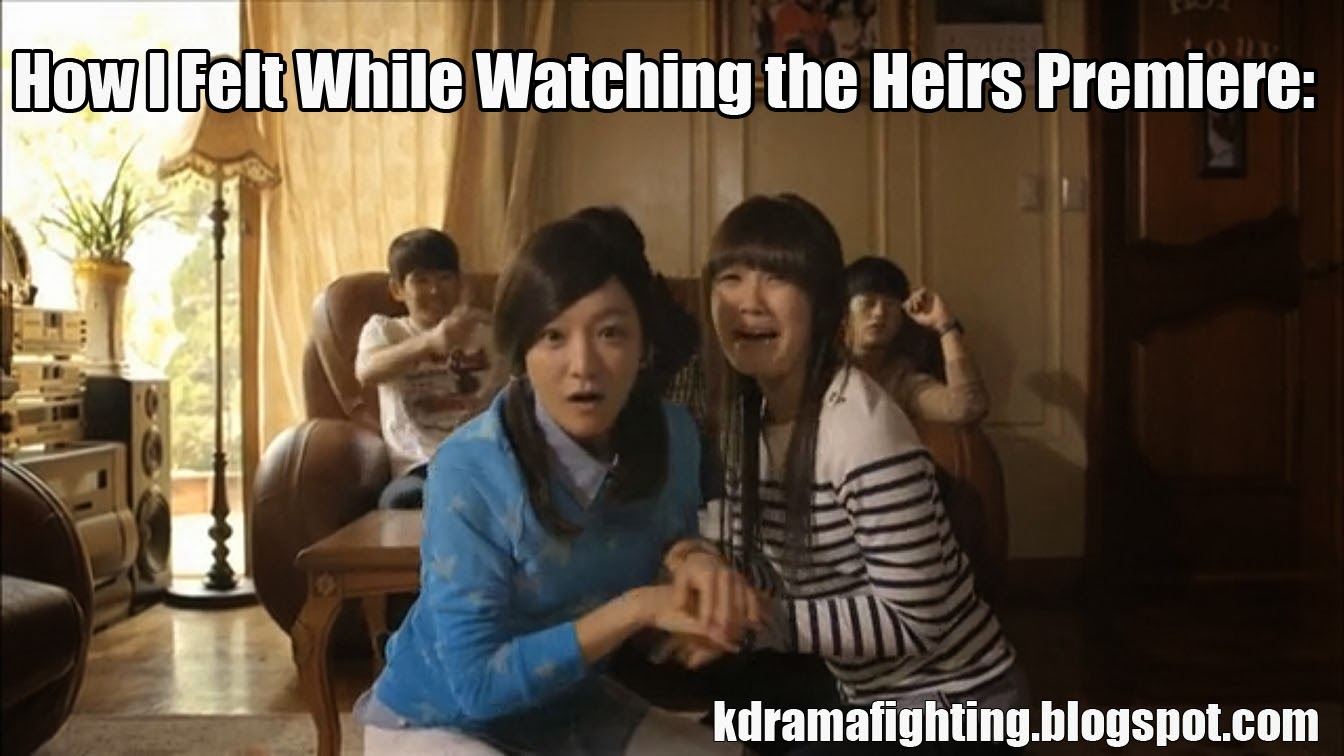 00.00-- Vivi: My palms are actually sweating. Settle down, Vivi. You’re not the one starring in this show. You’re safely on your couch in your pajamas. It’s gonna be fine.

00.10--Coco: OMG here comes some ‘90s Saved By The Bell “Best Summer of My Life” music and surfing scenes! How did they know how to reach deep into my nostalgic teenaged heart?

1.29-- C: Hey, I’m fairly impressed with Lee Min Ho’s engrish! Does this mean we are one step closer to being wed?

V:  I politely decline to comment.  He’s trying so hard!

1.42—V: It’s not a good sign when I have to read the subtitles to figure out what the Americans are saying.  So far, I feel like they’re just mumbling to cover up the fact that they probably don’t speak English at all. “Hey!*mumbling incoherently* Bye!”

C: Also I think they’ve managed to depict every stereotype of southern California ever. Can that girl get any tanner or blonder? Not to mention the surfer best friend.

V: I feel like the model for this best buddy slacker surfer friend came from some made-for-TV teen movie circa 1992.

1.51— V:Is this some kind of record? We’re under two minutes into the thing, and we already have a shower scene. Kim Eun Sook clearly knows what her audience wants. Why waste time?

C: Doesn’t count. Not standing in front of a mirror with steam rising. It does appear he is brooding about something, however.

3.13—V: Biggest plot mystery so far: Is Lee Min Ho sporting some lip gloss as he gazes into the distance?

C: I don’t know, but he sure looks pretty! And so, so contemplative. And probably misunderstood. And he probably doesn’t know how to love because he has never been loved.

C: This is all very unexpected. My psychological frame for making sense of Kdrama things is being thrown out of whack.

7.03—V: I’m getting flashbacks of Eun Chan with Eun Sang delivering food and demanding her payment like a boss.  On another note, did she just say that she’s a second year in high school?  What does that make her—15? 16?  For my own sanity, I’m just going to pretend that she’s a sophomore in college, okay?

C: Second male lead looks intrigued by her sassiness! What the? Are you sure he’s not the male lead?

8.50--C: Now that’s what I call a second male lead. I think the writers got a little carried away with casting so much eye candy, they don’t even know what to do with them all!

V: Were people just volunteering to be in this series?  All we need is a womanizer with a heart of gold, and we’ve pretty much covered every male lead in the history of everything.  And no, Surfer Dude doesn’t count.

12.47—V:Is that dream catcher going to be our terribly symbolic item for the rest of the series?  One can only hope that Park Shin Hye gazes at it wistfully at least 25 more times throughout the course of the show. (Fingers crossed!)

C: Buy me one now, Vivi! As an ancient symbol of our unending blogging friendship.

V: What if I painstakingly fashion one for you with my own two hands?  Does that make it more symbolic?

17.05—V:Not only is Eun Sang’s mom a downtrodden housekeeper, but she also can’t talk.  In the Olympics of misfortune, this woman wins the gold so far.

C: And where is her husband? We already knew the female lead has to be an orphan, so I guess it’s no shocker that he isn’t in the picture.

C: You’re right. Poor= everything is taken from you. EVERYTHING.

21.30 C: This all feels very Gossip Girl to me. Choi Yong Do=Chuck Bass, anyone?

V: YES.  So much yes to that statement. And Rachel=one of the female ones!  With the brown hair!

25.17—V: Serious concern: What will happen to Young Do’s super-gelled hair when he takes that helmet off?  I want to know.

C: All I know is that is definitely will not look as good as Ji Hoo’s helmet hair did!

26.0 C: Sorry but she is not as chipper about all her side jobs as Eun Chan was. In fact I’d say she’s kind of a whiner. You never saw Eun Chan crying cause someone knocked down her bottles of milk!

27.16—V: Okay, not as bad as I thought.  At least she’s 18!  But still, these people are too young to be engaged and stuff. (Shakes fist while rubbing geriatric knees) Kids these days!

30.02—V: It’s supposed to be a touching moment, but when I see “DRY CLEANING ONLY” written again and again all in caps like that, all I can think is, “REDRUM.”  Does this make me a bad person?

C: Yes! It does seem much more ominous than touching. This would be perfect to put in a trailer where you took some clips and changed the music to make Heirs seem like a Horror movie.

31.05—V: Aaaaaaaaaand there it is.  I was wondering how long it would take before we got a Park Shin Hye doe-eyed cryfest.

46.06—V: This may be an obvious point to make for a show called Heirs, but holy smokes are there a lot of grumpy rich people on this show. How will I decide who to hate first?

47.08—V: Apparently, Americans are the WORST.  Is this man propositioning her, or is that some terribly translated pickup line?

C: I think the producers are trying to make America seem as scandalous as possible to make sure that Koreans aren’t tempted to come here for the tan blondes and surfer dudes. They are like syrens!

51.50—V: Don’t listen when they compare you to angels.  They just want you for drugs.

52.48—V: I’m glad that in all of his time in America, Tan learned the truly important English phrases, like “dipsh-t.”

53.52— C: I just knew we’d eventually see the snotty Jun Pyo we all know and love. I’ve missed you so much!

V: Ah, their first fight!  Nobody pulls off sassy blinking like Park Shin Hye.  Nobody, I tell you.

59.46—V: A gang! That’s what you get for coming to the U.S.!  Everyone steals your bean powder and gives you money for sex and makes fun of you for being Asian!

C: And don’t forget the constant sound of police sirens! I didn’t expect Heirs to be such a morality tale, but lesson learned. Thank goodness they didn’t end up in NYC. You don’t even want to know what happens on the streets at night in this part of America!

1:00.30 C: Oh look! Here comes Edward Cullen! He even has a reddish hint to his hair like in Twilight. I wonder if he can read her thoughts too? That would be an unexpected twist the likes of the Secret Garden body switch!


How did you guys feel about the premiere?  Was it everything you hoped for and more?  Hard to say from just one episode, but at least it was entertaining! Comment below!
Labels: Heirs Heirs Korean drama Heirs Korean drama review Heirs premiere review kdrama memes Lee Min Ho Park Shin Hye