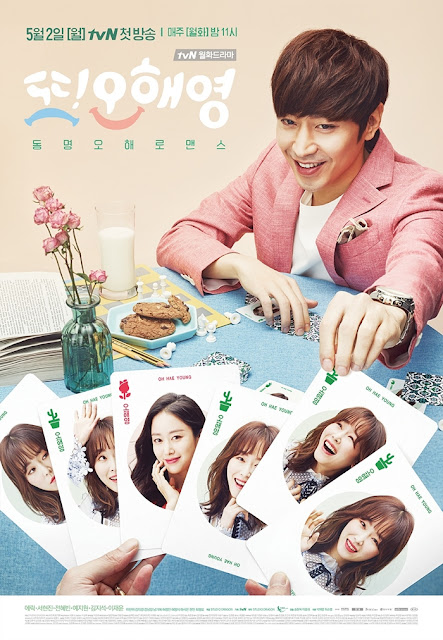 If you read our Marriage Contract review, you know that I haven't exactly been keeping up on the K-drama scene of late. From a brief look around the comments sections of various K-drama sites, it looks like I'm not the only one underwhelmed by Dramaland's current offerings, either.

Fortunately, summer is just around the corner (or so I kept telling myself when it rained for 3 weeks straight where I live), which means it's almost fluffy romcom season! Kicking off the summer season is a little drama that somehow took me completely by surprise. I remember being intrigued by the casting a few months ago, but I swear I heard absolutely nothing about Another Oh Hae Young (aka Oh Hae Young Again) until I suddenly saw that it premiered.

What it's about: Okay, so one of the reasons I forgot about this show might be because the plot description was so random. The series is about two women who share the name Oh Hae Young (Seo Hyun Jin and Jeon Hye Bin) who always interrupt each other's lives. Oh yeah, and there's a guy named Park Do Kyung (Eric Moon) who sees the future. *shrugs* That's Dramaland for you!

First impressions: I think it's probably a good thing that I forgot this drama premiered until after the second episode aired because if I had only watched the first one, I don't know if I would have been motivated to keep going. For one thing, the editing in the episode was kind of weird, so the characters didn't really gel for me right away. Second, (minor spoiler) I was actually pretty disappointed to learn that Oh Hae Young wasn't the one who broke off the marriage. Here I was, hoping that we had a completely new take on a female lead, and she just ended up being your typical heartbroken sad sack after all.

That being said, this drama is gradually worming its way into my heart. Once we learn a little more about Oh Hae Young, I quite like her. Sure, she's a typical drama lead in a lot of ways, but at the same time, she's not quite the happy-go-lucky sweetheart we're used to seeing. Sometimes she's lazy. Sometimes she's a gossip. Sometimes she says nasty things to and about other people. I don't know anything about Seo Hyun Jin, but she has a magnetic screen presence that makes me wish Oh Hae Young and I were friends in real life, flaws and all.

...And then, of course, there's Eric, playing the anti-K-drama lead in Park Do Kyung. It took me three episodes before I finally realized how few lines Do Kyung actually speaks. I don't know if I've ever seen a male lead quite like him. Instead of the angry, entitled jerk or even the recent trend of sweet second lead types in first lead roles, Do Kyung is a creature all his own. He has a temper, but he's also thoughtful and incredibly gentle. Eric is the perfect pick for his role, with his soulful eyes speaking volumes in every scene.

What's really making this series work for me is the combination of the two. Hae Young is always talking, but never revealing her true self, and Do Kyung is always listening, recognizing beauty under layers of noise. Their interactions are sweet and simple. Of course, it also doesn't hurt that I'm a huge sucker for any drama that uses the forced cohabitation trope....

That's not to say that the show isn't without its issues. The most glaring is the supporting cast. I love Hae Young's parents, but everyone in Do Kyung's immediate circle is a little too over-the-top and slapstick to really earn my interest. I keep wanting to care about his sister, but when she's forced to be the butt of so many jokes, how can I? Don't even get me started on his brother, her girlfriend, or their mom.

Also, I just need to say that the way the central conflict happened drove me nuts. Life lesson: If you're going to ruin someone's life, at least take 3 minutes to Facebook stalk him first and make sure he isn't engaged to someone else. BOOM. Problem solved.

All in all, Another Oh Hae Young is definitely the most promising drama airing right now (that's not saying much, though), and it has enough positives to keep me watching. I'm happy that I stumbled upon it.

Who else is watching? What do you think so far?

Where to watch Another Oh Hae Young:
DramaFever
Viki

Note: After a recent layout switch, we're seeing comments posted before April 7, 2017 missing on a few posts. We're working on a solution, and in the meantime, any new comments you leave will work!
Labels: Another Oh Hae Young new kdramas Oh Hae Young Again simulcasts Vivi