Missing 9 K-drama Review: What in the World Did I Just Watch? 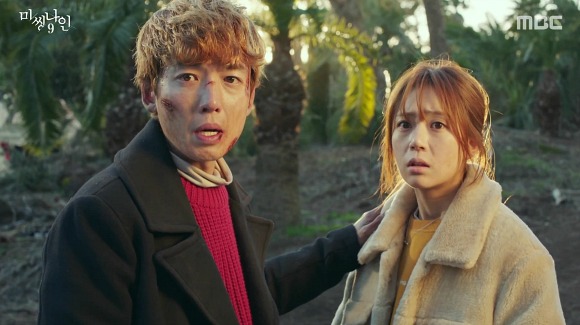 This is how I feel after finishing the Missing 9 finale. I drop a lot of K-dramas, but I haven't been this angry at a show's ending since the Prime Minister and I days of yore. I almost threw my phone across the room, but then I decided to write this review instead.

I just...I don't even know where to start with this series. For the first eight episodes or so, I was 100% on board. Sure, it had abrupt tonal shifts, but I found the balance between humor and tension refreshing and interesting. I also had complete faith in the writer, who has a knack for writing intriguing stories and using an ensemble cast well (Bad Guys is one of my top five favorite dramas of all time for just this reason.)

The cast was stuffed to the brim with interesting side characters and talented actors, and the relationship between Ra Bong Hee and Seo Joon Oh was one of my favorites in a long time. They had an equal partnership of supporting and caring for each other, which I really appreciate.

Is it just me, or does it seem like this was supposed to be a series about discovering what happened on the island, but the writer sorta forgot there would be 16 episodes and used up the plot way too early? I liked how the story played with memory and flashbacks while Ra Bong Hee was the only survivor (it also made the show delightfully female-centric), but the second we figured out who the real killer was and people started popping up in Seoul, it turned into a typical thriller—and one that often didn't make any sense.

I could forgive the minor plot hole or infuriatingly stupid mistake on the island (don't let killers run around free, people!), and I also appreciated that a few later episodes answered some of my early questions about why CEO Jang was helping Tae Ho so much, but so much of this show devolved into me shouting at my screen "You're a fugitive! Stop poking your head out the window!" or "Why are they doing that? Why is anyone doing any of this?"

I admit I still appreciated the comedic moments sprinkled throughout the series, but they felt much more out of place when 90% of each episode was devoted to things being terrible for Bong Hee and Joon Oh. I don't mind dramatic tension, but it becomes dreary if you don't balance little victories against the baddies getting their way.

This is a little shallow of me, but I'll admit that when the plot turned to nonsense, I kept watching to see Bong Hee and Joon Oh finally kiss.

AND THEN IT NEVER HAPPENED.

Now, I get that not every single series has to focus on romance, and I shouldn't have gotten my hopes up with this writer (see Vampire Prosecutor and aforementioned Bad Guys), but (and this is a big BUT) if you're going to let Choi Tae Oh almost die/not die a bajillion times and you have the luxury of chasing So Hee's stupid cell phone around Seoul for three episodes, you definitely have time to give me a few scenes of Bong Hee and Joon Oh canoodling to keep out that island cold.

Sigh. Such a waste.

Okay, so we didn't get a kiss in the last episode, so what did we get? Literally nothing that made any sense at all, and it makes me wonder if the team saw the terrible ratings and decided to give up. Choi Tae Oh has this whole giant street to himself to murder people because the prosecutor told all the police in Seoul not to help? Choi Tae Oh finally gets caught for murder, and then suddenly he's palling around with all those people he tried to kill for half the series? Look, I'm all for forgiveness and stuff, but that man belongs in prison! Investigator Oh is creepily flirting with both Bong Hee and her mom? (But seriously, what?) I was honestly expecting it to turn out to be a dream sequence at the end and discover that everyone was still stuck on the island or something.

The individual characters in this series gave us some lovely moments (Byung Joo-ah, you're the real MVP!), but in the end, the plane crash was the least disastrous thing to happen on this show.

Note: After a recent layout switch, we're seeing comments posted before April 7, 2017 missing on a few posts. We're working on a solution, and in the meantime, any new comments you leave will work!
Labels: kdrama reviews Missing 9 simulcasts Vivi