I have been working my way through some of the big dramas of 2012 that I originally missed because I was too busy watching older dramas.  Next up is Gaksital, which I convinced my husband to watch with me. Success!   The downside is that we're on a one-episode-a-week timetable over here, so I could probably teach myself to knit and then knit myself a snowsuit and trek to Alaska and back before I actually manage to review it.

So far, I've been pretty pleased with the dramas that popped up on last year's "best of" lists, and Arang and the Magistrate holds its own against the pack.  In fact, I enjoyed it so much that I wouldn't hesitate to recommend it to anyone who, like me, isn't really interested in anything set in the Joseon era. (Sungkyunkwan Scandal excepted, of course.  That thing could be set in space 40,000,000 years in the future, and I would still watch the whole thing with absolute glee.)

The very basic summary of this drama involves a grumpy rich kid who can see ghosts and the sassy ghost who won't leave him alone.  In other words, while there are the political power plays involving wealthy old men chuckling as they grind the faces of the poor that you might expect from any sageuk, there is enough other stuff going on to maintain interest.  Mystery, mysticism, and romance all take precedence over the political intrigue, and the drama is (in my opinion) the better for it.

The advantage to placing this drama in a historical setting is that it takes full advantage of the sweeping scenes common to historical dramas.  Even mundane scenes have stunning wide-angle shots filled with vibrant colors that you almost never get in Seoul-based workplace dramas.


The quality of the visuals goes downhill in the last few episodes of the drama (probably due to time and/or budgetary constraints), but with so much beauty frontloaded into the show, I can't complain.

Okay, okay, I will make one complaint.  I love the colorful costumes, but seriously, can someone please get Kim Eun Oh some sneakin'-around clothes that aren't bright teal and flowy?  Please.

The leads? Love them.  I haven't seen Shin Min Ah in anything other than My Girlfriend Is a Gumiho, but for what it's worth, she's fantastic at playing uppity mystical creatures.  She has an effervescence about her that just lights up the screen.  Even though you know she's just playing a role, you still want to become best friends so that you can invite her to parties and braid each other's hair and stuff.

I was already pretty much sold on Shin Min Ah before I watched this drama, but that wasn't the case for Lee Joon Ki.  In fact, I had only seen him in My Girl before this series, and, as we've already established, that didn't end so well.  In the few episodes that I managed to watch, he was probably my least favorite character, which is saying something.  I think it was the pointy shag haircut.  The mid-2000s weren't kind to imaginary Kpop idols, I guess.

It took me a few episodes to even realize that this was the same guy, which was probably for the best.  By the time I discovered who the actor was, it was too late for my previous prejudice to get in the way.  Sure, his role as a typical prickly kdrama lead basically required a bunch of shouting and/or gazing, but even if he had no lines and just sat in a corner, he would still get my vote for the way he whispers "Arang" with his stellar "I'm madly in love with you" face.


Some of the dramas that I've been watching of late (*cough*Heirs*cough*) have been a little lazy in the chemistry department, so I think I appreciated the chemistry here even more than usual.  The scene in episode 2 where Eun Ho measures Arang for her new clothes?  Wow.  Just wow.  I mean, it was this totally chaste, practical activity, and yet it was filled with tenderness.

The relationship itself was a little interesting to me.  There was a lot of shouting/wrist grabbing in this drama.  I kind of felt like there was a five second lag in every conversation between the time Arang said something and when Eun Ho heard it--just enough time for her to walk away so he would have to run after her and spin her around by the wrist.

While I generally dislike this kind of kdrama dynamic, the show established equality between the characters in other ways.  Visually, these two were partners.  I loved the number of level shots that framed the two lovers together.  Neither one was in charge--instead, they sat side by side on equal footing and worked together. 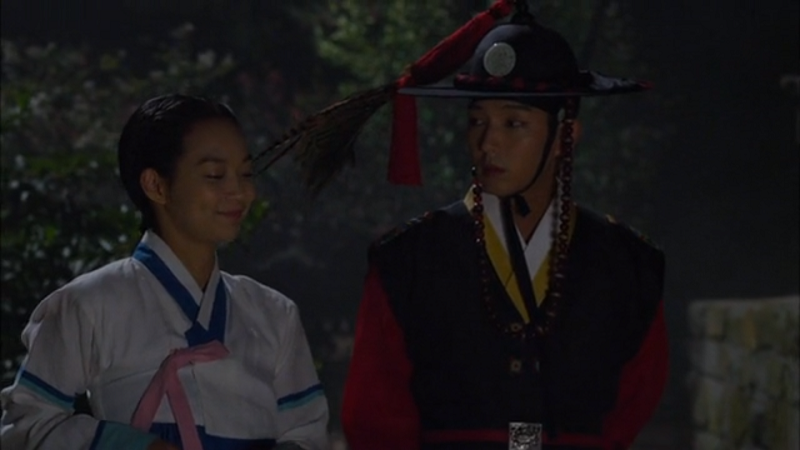 There was some infuriating "selflessness" that had me rolling my eyes towards the end.  I already talked about it here.  Let's just say that if you're trying to catch murderers and/or kill demons, you should probably tell your partner what's going on.  That goes for both leads.

Noble idiocy aside, there was just plain ole regular idiocy at times, as well.  Arang and Eun Ho seemed like decently smart people, and yet they never seemed to figure anything out until someone spelled it out for them.  There were a number of times when Eun Ho would make his shocked face and shout "What do you mean?!?!?" and all I could think was "Didn't you have this information three episodes ago?  How is it humanly possible that you didn't piece it together by now?"  I was genuinely baffled when the plot cycled back to "mysteries" that I thought had been resolved way earlier.

I was mostly swept up in this series until the ending, but the tail end of the series left me kind of deflated.  It wasn't bad and I can't really complain about how they chose to resolve the central conflicts, but I just felt like "Meh, well, I guess it's over." I think part of the problem may have been the fact that the entire last episode felt like it came straight out of a Choose Your Own Adventure novel.  ("You approach the library, and a spirit guard blocks your path.  If you fight him, turn to page 47.  If you talk to him, turn to page 5.")

Places to watch Arang and the Magistrate:
Dramafever
Viki
Netflix (Thanks to Rachel for letting us know this was added!  We also updated the rest of our Netflix list here.)