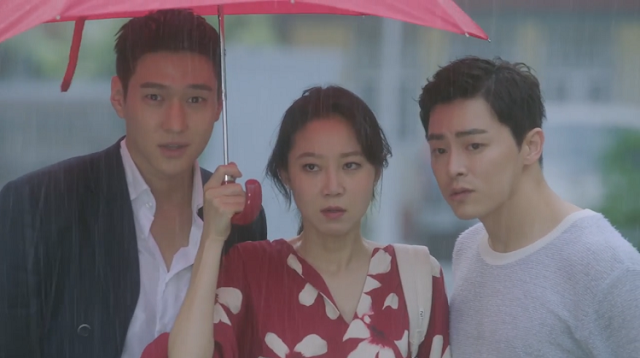 Jealousy Incarnate premiered a couple of weeks ago, and I went into it this weekend with a pretty clean slate. I hadn't watched any trailers or read any reviews beforehand, and I ended up watching the first four episodes in one sitting. And I fell in love. Then I started looking around at some of the early episode recaps to see everyone else gushing about it—and they didn't.

Here's why I'm totally in love with this show even if no one else is. I don't care what you think! I'll watch it ALL ALONE if I have to! (But please watch it with me anyway, okay?)

What it's about: Pyo Na Ri (Gong Hyo Jin) is a weather caster with dreams of becoming a news anchor. She nurses an unrequited crush on star reporter Lee Hwa Shin  (Jo Jung Suk) for three years, until he comes back from an assignment abroad to find that she's moved on to his best friend (Go Kyung Pyo). There are also a million side characters with very complicated side stories that it'll take some time to sort through.

Thoughts so far: I love it. I really, really love it. But I also get why others are skeptical. I went into this drama knowing that it came from the writer of Miss Korea, which, to me, is one of the most underrated female-focused K-dramas out there.

Many of the complaints I'm seeing so far revolve around a few main points: the unbelievably long and repetitive chest grabbing bit, the career women slapping each other, and Na Ri and Hwa Shin seeming like "typical" K-drama characters.

Honestly, none of those things bothered me all that much (okay, I maaaaybe shouted "Just TELL HIM" during those chest grabbing scenes) because Miss Korea did similar things at first. As longtime readers of this blog may recall, I actually had no idea what to think during the first few episodes of Miss Korea. Was it feminist? Anti-feminist? Thoughtful? Boring? Who knows?

As it turned out, the writer knew exactly what she was doing, and she used that dissonance and confusion to flesh out characters who felt real instead of feeling like an after-school special meant to teach us all a clear lesson. I'm trusting the writer to do the same here. Even within the first four episodes of Jealousy Incarnate, what seemed like a weird slapstick gag (Na Ri awkwardly feeling up her colleague) led to several discussions on illness and masculinity in Korean culture. It also opened up some beautiful, quiet moments of emotional vulnerability between our leads, even though the show is only beginning.

Similarly, while I didn't love seeing professional women getting into a catfight at work, I trust this writer above most others to treat ambitious female characters with care and to give them satisfying arcs. It also doesn't hurt that Lee Mi Sook was an absolute boss in Miss Korea, and I almost squealed when I saw her reuniting with this writer.

Finally, while I can see critiques that Gong Hyo Jin's character is similar to her other dramas or that Hwa Shin is just a rude jerk, I also trust these actors. Say what you will, but Na Ri is no Master's Sun copycat. When she announced "Whether or not we kiss is up to me," I literally clapped my hands and squealed. She's downtrodden, but she's not a complete doormat. I also really, really like Jo Jung Suk's take on Hwa Shin so far. He always puts just enough conflict into his expression to show vulnerability, insecurity, and fear underneath his jerk-ish moves. Plus, I wouldn't be surprised if it turns out that he had feelings for Na Ri all this time. More flashbacks, please!

Yes, I was scratching my head for the first two episodes trying to figure out who all of the characters were and how they're related. No, I still don't really understand where hot chef ahjussi fits in. Yes, I might be giving this writer too much credit, and this drama might end up more like Pasta than Miss Korea. Only time will tell.

But for now, I'm happy to give these characters the benefit of the doubt. Tally ho, my lovely little love triangle!

Please tell me I'm not the only one loving it, right?

Where to watch Jealousy Incarnate:
DramaFever