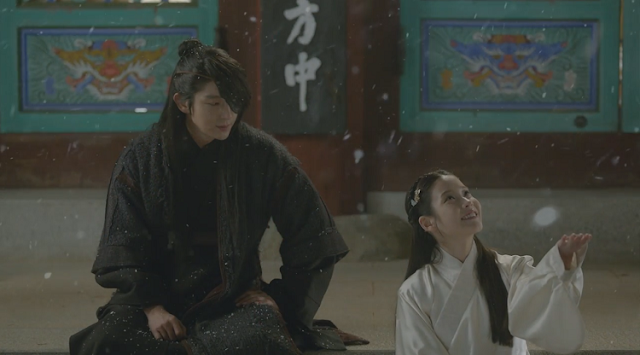 First things first: Moon Lovers: Scarlet Heart: Ryeo is an absurdly long title. I can envision a boardroom full of guys in suits, unable to pick the best title, so they just went ahead and used all of them. I'm going with Scarlet Heart to keep myself from getting typing arthritis, okay?

So how's this massive fantasy sageuk packed with flower boys shaping up? Not quite how I expected.


What it's about: Scarlet Heart is a remake of the hit Chinese historical with the same name, which was, in turn, based on a novel. It follows a young woman (IU) who accidentally travels back in time to find herself in the body of Hae Soo, a lady living during the Goryeo dynasty. Lucky for her, that particular time period was full of incredibly handsome princes who like to bathe with their shirts off. (No? That wasn't the point of the series?) She particularly finds herself drawn to the wise and kind 8th Prince, Wook (Kang Ha Neul), and the volatile 4th Prince, So (Lee Joon Ki).

Thoughts so far: The first episode was bad. I mean bad. Cringe-worthy dialogue and wooden acting that felt completely unnatural coupled with insanely close close-ups and weird music choices. In fact, the only reason I made it past that first episode was Lee Joon Ki's hair. That mane is so magnificent that it deserves to win the Daesang at next year's SBS Drama Awards.

Still, Lee Joon Ki's hair got me past the first episode, and somewhere along the line, I got swept up in this series. It became epic and heartfelt and beautiful in a way I didn't expect. Lee Joon Ki's hair continued to pull its majestic weight, but beyond that, as the story settles in to focus on our three main leads, I'm finding myself increasingly intrigued. Yes, there are still tons and tons of close-ups, but when it's a close-up of Kang Ha Neul's emotion-filled eyes, I'm somehow more willing to let it slide.

Each episode is surprising, and that's what's keeping me watching. I expected a cute, lighthearted fish-out-of-water romcom that focused on Hae Soo's experiences suddenly thrust into a new world. Instead, the series is shaping up to be much darker and more morally complicated than I anticipated.

While I do wish that Hae Soo had to take more time to adjust to the ins and outs of her new life (the same complaint I had with the time traveling hero of Queen In Hyun's Man), I appreciate that she has to adjust on a deeper level. She's suddenly faced with a violent world where gender and status determine your worth as a human, and it completely throws off her set worldview.

From that perspective, I'm glad that the writer didn't tone down the to male leads to make them more palatable to modern audiences. Am I having a hard time "shipping" Hae Soo with either the married guy or the killer who's legitimately on the wrong side of insane? Yeah. But for me, this show isn't really about the shipping. So and Wook are both heartbreaking, complex, intriguing characters, and Lee Joon Ki and Kang Ha Neul are making me care for those characters. (I also think IU is doing just fine, though Hae Soo isn't as complicated so far.) I don't have to "ship" Hae Soo with Wook in order to appreciate the beautiful melancholy in their mutual longing. I don't have to excuse Wang So's violence in order to appreciate that he's a brutal (albeit mesmerizingly beautiful) man trying to survive in a brutal world.

I guess that underlying conflict and tension are what kept me watching and really captured my interest, and now I'm completely invested in this messy, epic love triangle. And the fate of Lee Joon Ki's hair.

What's your reaction so far?