Heirs Kdrama Review, or, Why Coco and Vivi Are So Hard on Kim Tan

So, we actually managed to cover most of our Heirs-related feelings in our finale commentary, but we figured we should probably give a more thorough (and serious) analysis of the show as a whole.  After all, it has consumed so much of the kdrama community for the past 2+ months that it deserves some parting words!

Here's the one-paragraph overview: Heirs started out kind of ridiculous.  Then it became a train wreck, but also the most boring train wreck I have ever seen. Then it somehow improved for the last handful of episodes.  Is it worth watching for people who skipped it while it was airing?  I give it a decided meh overall, bordering on "Is it over yet?  What about now?"

Let's start with the positives.  Many of he the secondary characters were interesting, funny, and charming.  It took a while to get invested in some of them (like Hyo Shin) just because we were jumping back and forth between so many people, but the side friendships and romances were often a welcome relief from the main couple.  The two superstar couples of this show were Chan Young/Bo Na and Ki Ae/Hee Nam (the two mothers).  In both cases, I didn't particularly like the characters at first, but they gradually grew on me until I smiled every time they entered the scene. 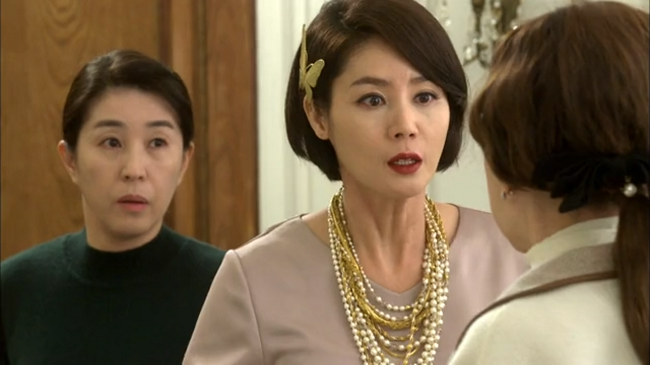 The second positive is Kim Woo Bin as Choi Young Do.  Wait, you already knew that Coco and I are completely and totally biased in favor of Young Do?  How ever did you figure it out?

I know I'm not the only one who started this show feeling a little guilty that I found Young Do more interesting than Kim Tan in pretty much every scene.  My theory is that Young Do had to be disturbingly cruel and violent at first to at least give people a fair shot at favoring the intended main couple.  Even then, the early episodes were a mental tug-of-war where one side said, "But VIVI, you should never favor bullies!  It's despicable!" while the other side said, "I can't help it!  He's so fascinating!  Plus, Kim Tan is about as interesting as watching cement dry!"  It also helped that we knew from episode 1 that this guy would never actually get the girl, so it's not like we were really advocating abusive bully boyfriends anyway. 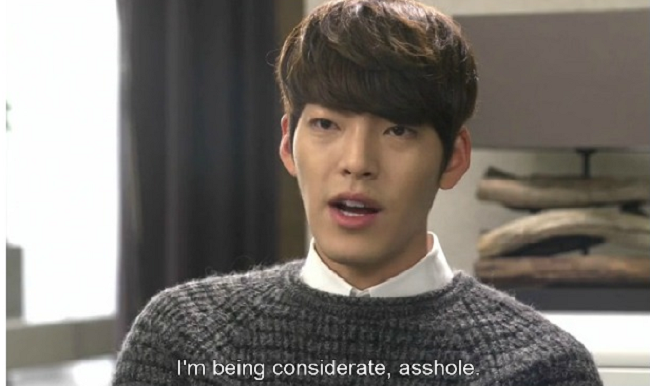 Even when I couldn't really like Young Do because he was too scary, he was always interesting to watch, and full credit there goes to Kim Woo Bin for making every facial expression in every scene meaningful.  He has won a few new fans over here for sure.

Really, most of the problems in this show boiled down to the central couple. There was very little romantic scaffolding at the beginning of the show to indicate why Kim Tan would be so obsessive about Eun Sang, and there especially wasn't any strong reasoning for Eun Sang to return his affections.  The male lead was already asking "Do I like you?" in episode 2, which pushed the show into the "romantic obstacles abound" phase before it had time to develop the romance in the first place.  That's also probably why the middle of the show felt so draggy--we skipped ahead to freeze frame love triangle standoffs by episode 5.  What options did they have by episode 10 but to repeat this standoff for the twentieth time?  Oh, wait, they could always go for the sad drive-by ignore walk.  I counted five of those in one episode alone! FIVE!  Sure, there was some cute banter in the last few episodes, but it was a little late by then. 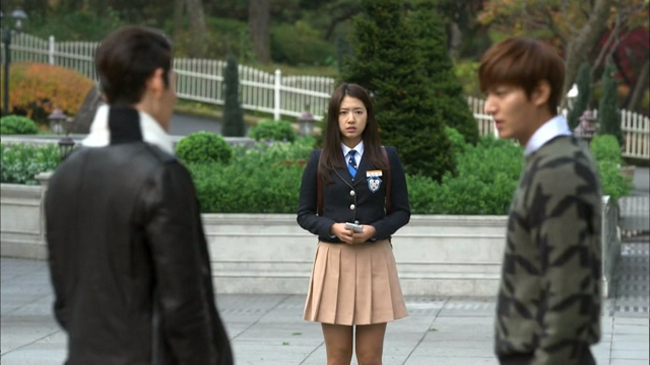 Without this romantic scaffolding in place, we just kind of had to trust the writer's word for it that this couple was madly in love.  I remember that I talked a little about internal versus external kdramas in my review of Nice Guy.  If that drama was internal, this one was a step beyond external.  These characters didn't even look like they were in love.  Eun Sang looked horrified every time Kim Tan invaded her personal space (over and over and over again), and yet, the words "I like you" suddenly came out of her mouth.  If the dialogue says it, it must be true!

This kind of forced feeling plays into a bigger theme on Heirs, and that theme is that it's all about Kim Tan.  I finally realized that Kim Tan's obsession was never even about Eun Sang as a person--it was always about Eun Sang as his personal symbol.  He chased her down obsessively, but that relationship was still very self-focused.  Here are some examples:

I saw Kim Tan progressing in some ways (like self-confidence and less family neediness), but for the most part, he wasn't much better at the end of the show than he was at the beginning.  While Young Do apologized to the kid he bullied, I wasn't convinced that Kim Tan wouldn't just punch someone else in the face if they got in the way of what he wanted.  Is that kid who broke down the door and grabbed the chair gone, or was he pacified because everyone changed around him?  His brother supported him, his dad had a stroke and caved, and even his mommy troubles came to an end.  What bad habits did Kim Tan abandon in all of this?

In the end, though, I'm glad I watched Heirs.  Even the painful music and the ridiculous styling were fun to mock!  Love is the moment, guys.  Never forget.  Or is love my pain?  Or is the moment my pain?