The first time you watch a Korean drama, it can be kind of confusing when they throw in titles and terms for people that aren't necessarily used in the United States.  For example, the fact that Jan Di always called Ji Hoo "sunbae" threw me off for quite a while. And by a while, I mean that it still throws me off a little.

Wallow in confusion no longer!  Today I'm going to start with the basics: immediate family terms.  Once you master these, you will be well on your way to understanding family relationships just by hearing the words they use!

(Note: Romanized pronunciation spellings can vary based on the source.  The "eo" is written a variety of ways, including "uh," "u," or "o.")

These terms are generally reserved for rich, successful parents in k-dramas.  If a character calls his (because, let's face it, the girls are never the rich ones) parents by these terms, you can pretty much guarantee that they will object to the marriage.  They will also probably slap their son for insolence at some point and/or threaten to kick him out of the company. 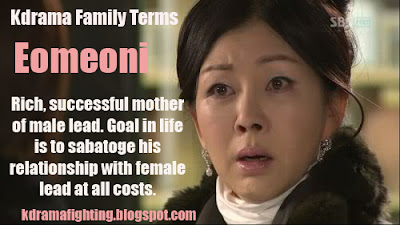 This is what poor heorines call their parents (if they have any).  An eomma is usually well-meanting, but loves money.  She says embarrassing things in public about her daughter marrying a rich man.


An appa is supportive and kind.  He also often racks up gambling debts that force the daughter to do ridiculous things like sell nuts at the side of the road or marry a prince.

The other confusing part is that a person doesn't necessarily have to be related to you by blood to be called these terms.  They can be used for any older girl who has a close relationship with you.  Got all that?

Let's talk about what this means in practical terms:

Noonas on Korean television tend to fall into two categories:  ACTUAL older sisters to the male leads, or the male lead's first love.  If it's an actual older sister, you're in luck!  She will give the heorine a makeover and drive her around in fancy cars and show up at all kinds of critical moments, willing to help. 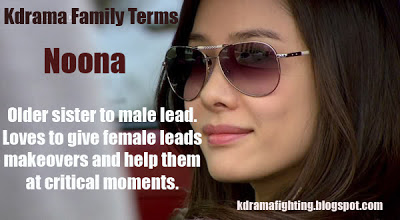 If the noona is a first love, it gets slightly trickier.  Sometimes, they can be helpful, but more often than not, they're monsters in disguise.  Here's my checklist of things to watch for if you happen to run into a noona in real life:

1. Does she squint at you for long periods of time and/or scoff at everything you say?
2. Has she ever thrown a glass of water in your face?
3. Did she cause an "accident" that almost got you killed?
4. Has she specifically told you that she's going to steal your boyfriend?

If you answered YES to one or more of these questions, she's probably an evil noona.  Your best bet is to carry around a recording device at all times, since she's probably going to say something terrible sooner or later that no one will believe. Also, if she calls you and says, "Let's meet up," hire a bodyguard and run away.

Which brings us to unnis (older sisters to females).  I have watched a lot of dramas, and unnis pretty consistently fall into one category: villains.  If you think evil noonas are bad, hope you never run into an unni.  They have short, sassy haircuts and wear a lot of blazers and miniskirts.  They also HATE their younger sisters and never want them to have anything, even though this hatred doesn't usually have a very good basis.  You can spot an unni from far away because she will constantly say things like, "You're not my sister.  Why do you keep appearing in front of my face?"  She also hides important documents in her purse and slaps people.  From what I can tell, an unni's favorite hobby is stopping people from becoming princesses.


If older sisters are generally terrible, older brothers are generally awesome.  Again, these terms depend on the gender of the person speaking, and they can refer to people who aren't related by blood.

A hyung is the older brother to a man.  In k-dramas, the hyung is pretty much always a close childhood friend or cousin instead of an actual older brother (aside from the brothers in Lie to Me).  If it's the male lead's hyung, he will probably fall in love with the heroine and become part of the central love triangle/square.

Get used to this term.  When you inevitably have to dress as a man, you will end up awkwardly calling the man you love "hyung" to protect your secret.
﻿
Last but not least is oppa.  Since heroines are generally the oldest siblings in their families, they don't have real oppas, and yet this is possibly the most-used family term in k-dramas.  This is what cheesy girls call their boyfriends.  In order to get this right, try blinking your eyes rapidly, placing your hands cutely on your cheeks, raising your voice three octaves, and drawing it out like this: "oppp-pppaaaaa."  For full effect, it should be used in sentences modeled after the following:


"Opp-ppaaa, I'm hungry!"
"Opp-paaaa, give me a piggyback ride!"
"Can I call you...opp-ppaaaaa?" (Said with a sly, ironic glance intended to infuriate the man you love)

There you have it!  Get out there and apply your new knowledge!

P.S. We decided to keep the polls on our music awards open for a while longer, so head over and vote!