I Wish My Life Were a Kdrama: Expectation vs. Reality

I wish my life were a Korean drama. I don't think I'm alone in this. Judging sheerly by the number of fantastic kdrama fangirls we follow on Pinterest, many women feel the same way to some extent. The difference is that I seriously expect that my life will still turn out like one. Now I know this may sound delusional, but hear my reasoning out:

5 Reasons I Expect My Life to Be Like a Kdrama


1. Most kdrama female leads live in the
booming metropolis of Seoul. I don't think romantic comedy kdramas ever take place anywhere else. Now, I'm not so delusional as to believe that I really will meet Lee Min Ho and marry him and end up living in Seoul (although I won't rule that out), but the American romantic comedy equivalent location is New York City. I live in New York City! I have lived here for nearly six months and have had the expectation that my life would magically become a romcom from day one. I still just know that it will.

2. Kdrama female leads tend to be hardworking in a lowly job in which they are unappreciated or belittled by those in authority. I am a nanny on the Upper East Side for very wealthy people. Talk about working hard and finding yourself in interesting situations! This is right up there with personal assistant in terms of kdrama potential.

3. One way or another, kdrama females are somehow exposed to rich men, oftentimes multiple rich men, who all fall in love with them. I have the opportunity to take extended vacations to the Hamptons and West Palm Beach as a nanny, which are two of the biggest playgrounds for American millionaires. I can think of few better, non-prestigious jobs to be in where there is high potential to run into mean, attractive, wealthy men. Every time I go to the beach to walk my employer's dog I'm just sure that I'll have an awkward mishap with one, and that we will hate each other, but then run into each other again, and then he will fall in love with me, but I will snub his advances, but despite the obstacles that arise due to our differences in education and class, we will eventually fall in love, even though it's against his mother's wishes. Sometimes I even put on extra makeup just in case.

4. Female leads in kdramas usually live with their family or close friends in small, poorly furnished, on the brink of being condemned apartments in the poor area of Seoul. I live in the Bronx in the poorest congressional district in the U.S. My home is so old and unstable that I live in constant fear that my add-on bathroom will fall off the side of my house one day with me in the shower. You can visibly see the slant of my room and a ball will roll out the door if left unattended. I am fortunate to live with two interesting roommates who would make great eccentric best friends in my kdrama life. I just have to be careful about borrowing money to improve our furnishings, or else the loan sharks will probably come get me and repossess everything. 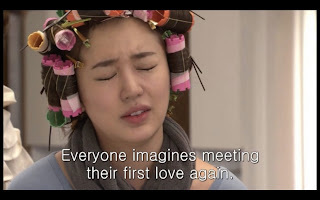 5. Kdrama female leads are very unlucky and awkward in love. Their first love either ran off with their best friend, never knew they existed, or moved to another country to study abroad, and they always run into them years later at the most inopportune times. Then they get themselves into these ridiculous, clumsy, embarrassing situations with really attractive men. These kinds of things happen to me. For example, I once moved back to my old town and had just bought a moped scooter that I did not know how to drive. I decided to take it for a spin anyway and ended up crashing and falling off it in a parking lot. Then I heard a horn and looked up to see that it was my first love, who I had not seen in 2 years, waving at me from his car. He had just witnessed the whole thing. This was not even a small town. This is the lack of luck in love that I am just sure will lead me to some fantastic kdrama style moments.

Now, I have to admit that there are many instances in my life where I can just imagine the moment fitting so perfectly into a kdrama, and I'm tempted to try to make it fit into my kdrama-induced delusions, but then I realize what would actually happen. Here is an example: 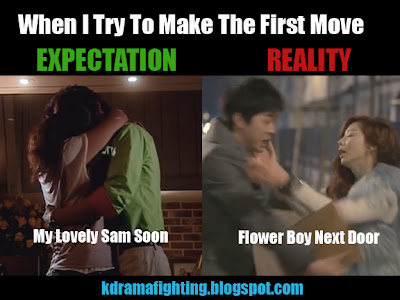 So, there you have it. I am pretty convinced that my life might still turn out like a kdrama, but I also am aware that I should not necessarily try everything I see on TV. How are your lives like, or unlike, Kdramas? Share in the comments below.
Labels: Asian drama Coco Flower Boy Next Door I wish my life were a kdrama I wish my life were a Korean drama kdrama kdrama blog kdrama fighting kdrama humor kdrama memes korean drama korean drama blog