As I mentioned in our "Best Kdrama Recommendations for Beginners"  post, Rooftop Prince is a great place to bridge the gap between rom coms and full-on historical dramas.  It mostly takes place in the present, but it has just enough major plot points taking place in the past that you can't just fast forward through those parts. So let's take a look at what makes it tick.

This was a drama that I almost quit after the first episode.  A lot of stuff happened, but I just felt so bored by the whole thing that I wasn't sure if I could continue.  As it turned out, once I just sat back and enjoyed the ridiculous ride, I had a grand ole time.  Am I going to watch Rooftop Prince over and over and over again?  Probably not.  But I would still recommend it to others.


The Best of the Best

The plot was pretty fast-paced, the murder mystery kept me guessing until the end, and the romance was cute, but I feel like all of these positive elements were massively eclipsed by the supremely awesome friendship between Lee Gak and his minions.  They're like a time-travelling F4, only their scenes are funny on purpose instead of on accident. (Can we all just pause and remember Woo-bin's gangsta English and Yi-jung's five-minute-long, super creepy old man saxophone solo in BoF?) These guys were the highlight of the show for sure, and I got giddy every time their wacky "adjusting to modern life" theme song started to play.

Also, random observation, but speaking of k-drama Hollywood lookalikes, Chi San totally looks like Tony Curtis in Some Like It Hot.

....I just spent five minutes staring into space reminiscing about all of my favorite scenes with these guys while giggling to myself.  It has short-circuited my ability to think about anything else on this show.  Let's move on, shall we?

This is both a strength and a weakness of Rooftop Prince.  Every single character is pretty much a cardboard cutout.  Don't go into it expecting depth or tons of development from pretty much anyone (I would argue that even the leads make pretty minimal changes), and you'll be able to enjoy things a lot more.  This means that every time Tae Mu's face appears on the screen, you can just fast forward until he's done clenching his fists for the time being. (Seriously, though.  So. Much. Fist clenching.)

That being said, I kind of appreciate that they just went for pure evil with Tae Mu and Se Na.  I like character development, but I hate those halfhearted attempts to make us like the snooty female antagonist in the last two episodes (Kang "Bras-for-shirts" Hye-won from Full House, I'm looking at you). When they give us villains who give away their siblings and murder people within the first episode, I feel comforted knowing that I'm not going to feel guilty for still wanting to punch them in the face at the end of the show.

*Spoiler warning*  Okay, Okay, I know that they technically tried to redeem Se Na a little at the end, but in my book, being willing to help murder only some of the people instead of all of the people doesn't exactly qualify as gold-star material.

This is for the cool kids' club of people who have already seen the last episode, so stop reading if you haven't watched yet, okay? You can come back in the three days it will take you to watch the whole thing.

1. I don't know if I have just watched too many crime shows or what, but I couldn't believe how incompetent everyone was at catching criminals.  Seriously.  Tae Mu should have gone to jail in the first five minutes.  Remember how he framed Lee Gak for murder by sticking a bag of cash into his car?  Remember how he wasn't wearing gloves and his fingerprints should have been ALL OVER THE PLACE, but everyone kept saying they had no evidence?  Yeah, me too. 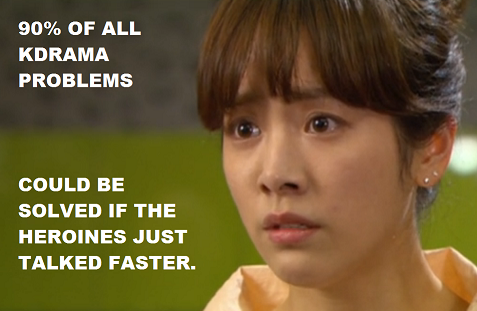 2. The other way they could have solved their problems was by finishing their sentences.  When the grandma accused Park Ha of stuff, I kept yelling at the computer, "Call your friends in New York! They will corroborate your story!" This drives me crazy in k-dramas.  If someone cuts you off while you're explaining something important, don't just look startled! Talk louder! Sheesh.

3. Speaking of incompetence, can we just talk about how insanely idiotic Boo-young's plan was?  I mean, sure, it was selfless and noble and crap, but it was also the stupidest idea of all time.  Let's look at the logic: 1. You love a man enough to die for him, so you obviously don't want to get him killed off.  2. You know that there are at least three people plotting to kill him. 3. You are the only person outside of the murderers themselves who knows about this plot. And your solution is...to kill yourself without telling anyone anything? Because of some mumbo jumbo about how they won't get close to the prince if the princess is gone?

Two immediate holes in this plan: 1. They tried to kill the prince again approximately five minutes later.  2. Didn't they make a big deal about how scarred her face was in comparison to the princess?  How did no one notice this when they pulled her out of the water?  Based on all of the crime shows I watch, I'm pretty sure bodies don't decompose in a few hours.

4. And finally...
Um, what happened in the end?  They were babbling about waiting hundreds of years for love and then Tae Young appears next to her, but then he's Lee Gak in his old-timey clothes? So what does that even mean?  Tae Young remembered being Lee Gak?  Lee Gak somehow gazed through the veil of time, but still had to wait 300 more years to  meet her? Lee Gak took over Tae Young's body? Did he live a lonely life and then die?  Did he travel through time again?  WHAT HAPPENED???  As someone who takes time travel physics very seriously, I need to know what that crazy ambiguous ending means.

All random complaints aside, I really enjoyed Rooftop Prince.  Go watch it right now and then come chat about it with me!