Results are in for our first Fashion Face-Off Friday: Crazy Man Hair poll, and it's a tie between Lee Min Ho in Boys Over Flowers and Jang Guen Suk in You Are Beautiful! Here is the conversation where ViVi and I discussed the close race. ViVi thought Lee Min Ho won. 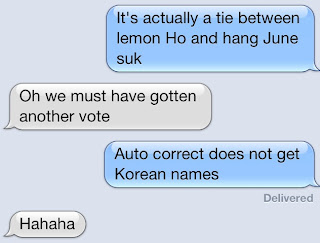 Let this be a warning to you when texting your kdrama fangirl bestie that auto correct just does not get it.

For our second Fashion Face-Off Friday, where we celebrate bizarre kdrama styling choices, we examine female bowl cuts. Who ever said bowl cuts never look good on women? Everyone...except kdrama stylists. But let's be positive about this. Some leading ladies pull it off better than others and are a little easier to imagine as desirable to men.  Let's vote on, as far as bowl and extended bowl cuts go, who wore it best!

Goo Jae Hee from To the Beautiful You is a female lead who got a bowl cut to try to pass as a boy. I find it hard to believe that anyone actually fell for it because she is still so pretty. Makes me jealous that she can be that pretty with a bowl cut. I would look absolutely ridiculous.

Competitor #2
While this might be considered more of an extended bowl cut, it is still a strong contender. I have to admit that I was really bothered by Jan Di's hair for the first half of Boys Over Flowers, but a combination of her hair growing out a little and me growing to love her more allowed me to look past it and even consider it kind of cute.
Competitor #3
Gil Ra Im sports a whispy, side-swept bowl cut. She is not trying to pass for a boy, but she might be sporting this look to fit into her male dominated field of stunt doubling for action films. She pulls it off in a sassy way.
Competitor #4
It was never made clear whether Eun Chan from Coffee Prince cut her hair into a bowl cut to try to look androgynous, or if she just cut it that way to keep it out of her way as she worked one of her many physically taxing jobs to support her family. When I first started watching Coffee Prince I asked my friend who had already seen it whether her hair ever changes. I was so impatient for her to be pretty. She told me that it wouldn't happen until the last episode and I thought I would die. But gradually, just like Jan Di, I came to love Eun Chan so her hair didn't matter.

So who pulled off the bowl cut best? These female leads all did their darndest in a difficult style situation and pulled it off way better than I ever could. Vote below now! 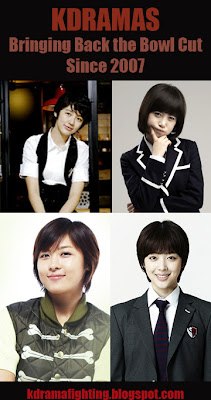