I think that our last Fashion Face-Off, the Battle of the Facial Hair, might have been the closest contest we've ever had.  As of this minute, Hyun Bin wins for his character in The Snow Queen, but it's been pretty back-and-forth between him and Cha Seung Won in City Hall this entire time. Can I take this as a sign that we wouldn't mind a little more scruff on our leading men every now and again?

I spent last weekend at my little brother's wedding (I can't believe he's married! Awww, but also weird?), and it put me in the mood to write about kdrama nuptials.  Now, most wedding fashion that appears in these shows doesn't actually make it to the altar.  I feel like the prettiest gowns and suits are usually wasted in those dramatic "Omo, he's marrying the wrong person!" or "We're gonna get married, but in a terrible twist of fate, we need to wait five more episodes!" kinds of scenes.  So instead of writing about wedding fashion, I want to devote this week's face-off to something that isn't clothing, but still requires a lot of style: kdrama proposals. 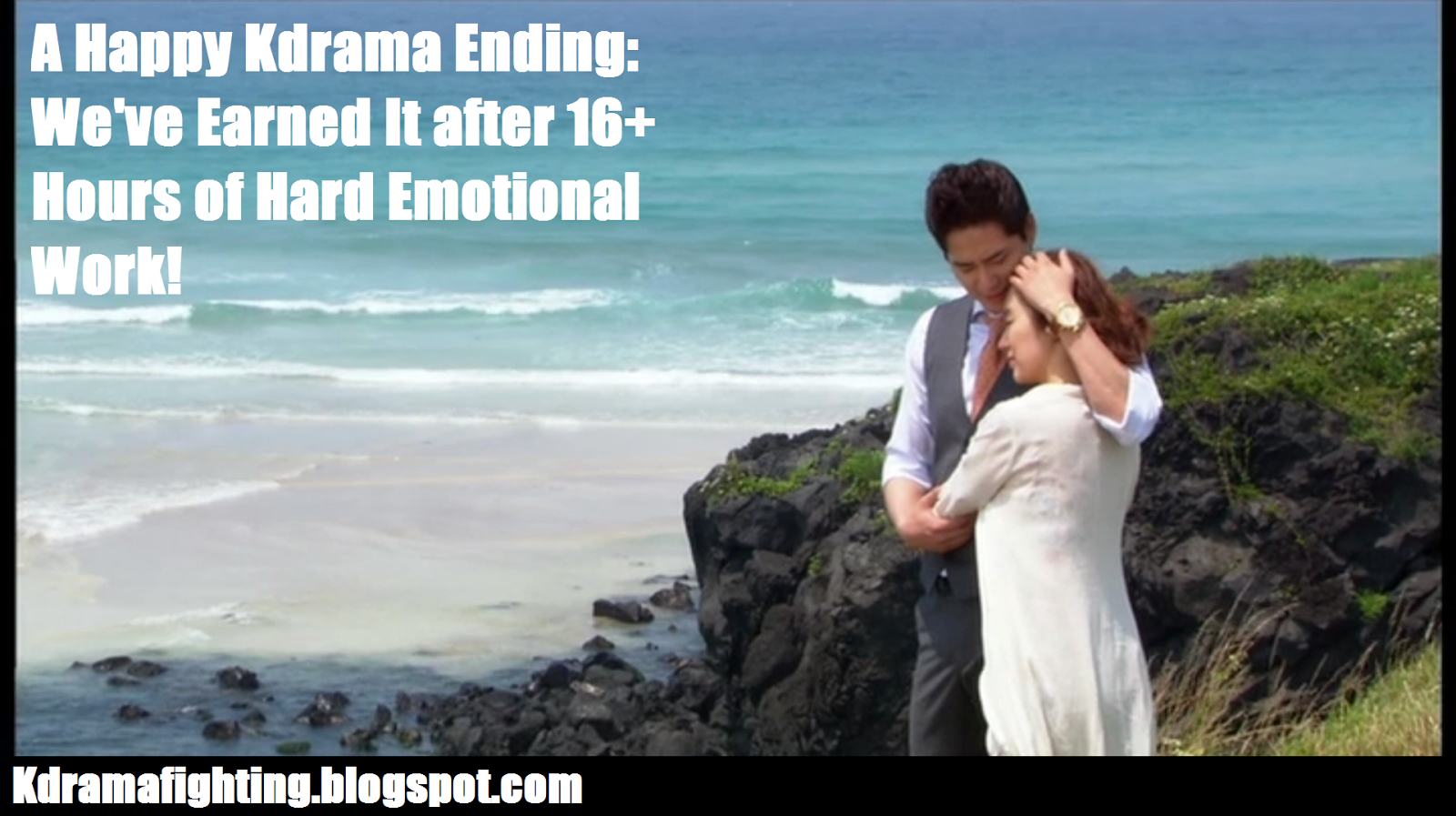 Many kdramas leave us with the couple staring off into the sunset and allow us to assume that they will live lives of blissful commitment.  Other dramas fast forward to show us wonderful snippets of future married life.  Other dramas are terrible, stingy buttfaces and don't really give us much romantic closure at all.  But every once in a while, we get to see the actual engagement unfold, and the proposals are usually tailored to match the characters.  This week's contenders might not all be the best kdrama proposals (at least in my opinion), but they are a diverse selection that will hopefully meet everyone's unique tastes.

Obviously, there will be some spoilers here.

Contender 1: The "It's the Thought that Counts" Proposal (Protect the Boss)

I'm terribly biased in favor of this show, and Noh Eun Seol and Cha Ji Heon are one of my favorite kdrama couples.  So when Eun Seol shows up to a romantic candlelit dinner and Ji Heon croons a cheesy ballad to her by way of expressing his feelings, you would think it would be heart-melting swoon material, right?

You know that feeling when you're watching a singing show and one of the contestants has a hilarious personality, so you're really rooting for them to win, but then they open their mouths and it's so painful that you have to change the channel?  That's kind of what happens here.  My reaction went from "Awww, he put 'I love you' inside of a fortune cookie!" to "Why is this happening????" in about 0.2 seconds.  Poor Ji Sung has kind of a cringe-worthy voice, but at least he has a nice heart!

If you're someone who values effort over execution and secretly applauds the William Hungs of the world, this proposal is for you.

I never really understood the allure of proposals that happen in front of gigantic groups of people.  Making me come down to the field in a baseball stadium? Blech. Putting my face on a Jumbotron for the whole world to see?  No, thanks.

I have to admit, though, that I'm a huuuuuuuuuuge sucker for anything that involves a massive choreographed dance number.  Maybe it's my childhood dream that my life would transform into the movie Newsies:

Why yes, that is 17-year-old Christian Bale belting his lungs out.  And be-eyepatched Trey Parker, before he became old and gross.  And the guy from The Mighty Ducks. Okay, okay, his name is Aaron Lohr, and yes, I do remember that from eight-year-old Vivi's mild obsession with this film.

Choreographed dance numbers have become an increasingly trendy way to propose in recent years, so it's no surprise that A Gentleman's Dignity matched Yi Soo's highly stylish outfits with an equally stylish proposal.  No matter how you feel about Kim Do Jin as a character, you gotta give the guy mad props for planning this whole thing and then tacking on a throwback to episode 1, as well.

Aside from Newsies aficionados, this proposal also suits those people who enjoy announcing their love to the world.

Poor Hang Ah had two big-gesture proposals early on in this series, and both of them ended up being hoaxes.  It's only fitting, then, that the real deal would come without any fuss as they stand next to some military vehicles.  It might not be the fanciest proposal in the world, but who needs balloons when you get lines like "I'm going to shower you with kisses every morning"?

We're focusing on substance over style here, but those conveniently falling blossoms don't hurt the mood, either.

Gil Ra Im is a pretty low-maintenance kind of girl.  She usually prefers comfort, practicality, and kicking butt to anything frilly, so bringing her to city hall and announcing immediate marriage might be the best bet for her personality.  After all, she has already declared her disdain for chocolates, wine, and all other romantic fluff. 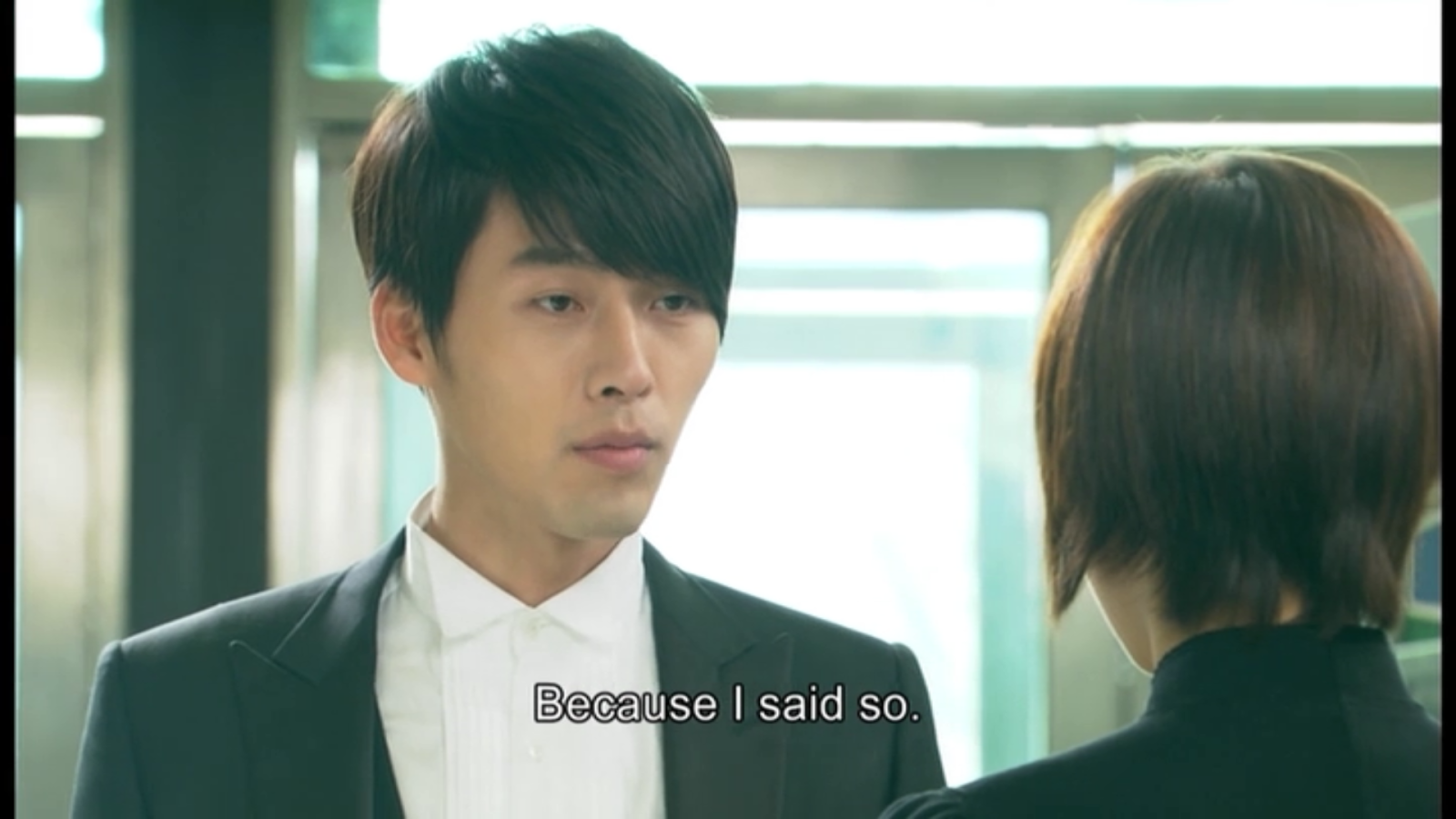 On the other hand, "Because I said so" isn't the most compelling reasoning I've ever heard to get married, and I simply can't bring myself to believe that anyone--Gil Ra Im included--actually hates a good box of Lindt truffles.  Impossible!

Estonians have this phrase, "laiskvorst," which directly translates to "lazy sausage." I personally feel like this is kind of a laiskvorst proposal, but hey, maybe it works for some people. If you've got a no-nonsense attitude and prefer to circumvent all of the obnoxious wedding planning in favor of getting right to the honeymoon, then you've found your dream proposal right here!

Roses? Check. Candles? Check. Waltzing? Check. FREAKING TWINKLE LIGHTS? Check. It might not be new or exciting, but sometimes they're classics for a reason. Yes, she WILL dance with you through life.  She's not a crazy person!

I just noticed that 3/5 proposals here come courtesy of Kim Eun Soook.  Does this give us a hint for the future of Heirs?

And, just because you all read through this so nicely, I will share what might just be my favorite ending love scene of anything ever created:

Okay, so Richard Armitage doesn't technically say the words "Let's get married" with his voice, but I don't even care because he SAYS IT WITH HIS EYES.

So which proposal scene best matches your style? Did we miss one of your favorites?  Vote and comment below!