I just finished watching Personal Taste/Preference, and I have such strong feelings about it that I'm skipping the other two reviews I've been working on (Rooftop Prince  and A Gentleman's Dignity) to get this one off my chest.  The best analogy I can think of for this drama is when you get to the bottom of a bag of popcorn and you have those half-popped kernels that you eat because they're kind of popcorn-y, but the whole time, you're fully aware that it would be a million times more satisfying if you had just let it cook another 20 seconds.

Personal Taste was my half-popped popcorn.  I watched it and got so close to loving it so many times, and yet I felt like it never really reached the plot's full potential.  Here are some quick observations: 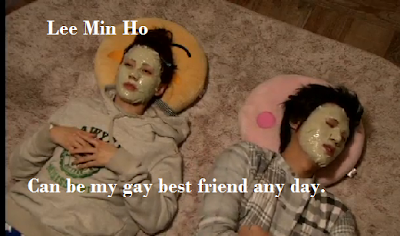 1. Lee Min Ho:  Obviously.  I was never crazy about him in Boys over Flowers (the crazy poodle hair didn't help), and I haven't gotten around to listening to Coco's rave reviews and watching City Hunter yet, but I'm sold after this drama.  He was dashing and charming and every bit the Korean Ryan Gosling that Coco has been calling him all this time.


2. The story (part 1): I thought that the basic story of a guy pretending to be gay was different and interesting, and the episodes where he fills the role of her "gay best friend" were some of the strongest and funniest in the entire series. Watching him try to buy tampons in front of giggling schoolgirls had me laughing out loud. I wish they had played up that element of the story for longer.
3. The "Game Over" kiss: Wow, Lee Min Ho has come a looooong way since his frozen-faced BoF days.  Nothing petrified or awkward about this one.

4. Chairman Choi: I enjoyed a lot of the minor characters, but he deserves a special shout-out for being so well-rounded and empathetic and just human.

1. The story (part 2): While I'm usually the first one to defend dramas that give the main couple some cute time together after they finally kiss, this one went downhill pretty fast.  It wasn't nearly as funny, and I found myself fast forwarding just to see what would happen in the last few episodes.  That was kind of a letdown after the strong middle.

2. Park Gae In: This character drove me insane.  I almost stopped watching after the first few episodes because she was so messy and awkward and pathetic and a pushover that I couldn't handle it. Once Jeon Jin Ho started to give her makeovers and teach her to love herself, I had really high hopes that she would turn around and become strong (and also maybe stop wearing overalls?).  This is where that half-cooked popcorn disappointment comes in. There was so much potential for this to be a really positive empowerment story, but every time she took a step forward by being assertive or slapping someone or shouting when she was angry, she took two gigantic steps back. When she offered to marry Jin Ho even though he was gay, my fist almost went through my laptop.  I'm not even kidding. (As a sidenote, this was exactly the problem I had with Pasta.)

Note: Stop reading here if you don't want to know what happens in the end.  I warned you!  Thar be spoilers here!

In the last two-ish episodes, I was willing to forgive and forget all of the rest of it because I was so happy that she wasn't immediately caving and running back to Jin Ho, but THEN THAT BEDROOM SCENE HAPPENED.  After ALL of this talk of character growth and courage and loving yourself and whatnot, she says, "Even if you betray me a thousand times, I will still trust you and love you because that's what I'm good at."  And then she looks like she's going to cry. And then he takes her clothes off.  WHAT???? AKLJHLIUFHSDUFGBAKJYEGKGBVJHSBDGHFGBSKHRFVBGJHGFHSDGFAJL (*breathe*) FJGHKDJFHGLKUSFHBGKJDBFVHJGERKJFHBSARHJGVDGHTFBJHSDGFHSBDGDFHBSD

Even though I really liked his character and he actually treated her well, this ruined it for me because it didn't matter.  He literally could have been a serial killer or a pest control salesman, and she would have taken him back anyway.