Skip to main content
Labels
Posted by Unknown May 09, 2013 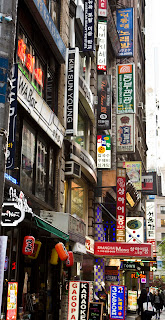 Besides the fact that living in New York City ups the chances of my life becoming like a kdrama, another awesome part about living in NYC is that I have access to Ktown via a short subway ride. This Ktown is actually quite small, but that doesn't mean it isn't packed full of fun and interesting Korean experiences. Last weekend I convinced my Korean friend to take me on a field trip for some awesome food and fantastic shopping. So here is Part 1 of a little travelog of my adventures in Ktown. I didn't have time to try it all, so look forward to a posts about Korean karaoke and a Korean spa.

First, I took a little walk down the main street and found myself an adorable Korean cosmetics store called The Face Shop. Guess who I ran into! If it wasn’t Kim Hyun Joong, himself. It’s so funny to actually see Korean stars I recognize advertise products here in America. Aren’t we cute together? It’s just too bad that he was stuck to the window and had that logo across his face because I really wanted to pose next to him if he had been a cardboard cutout. 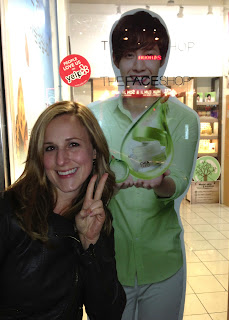 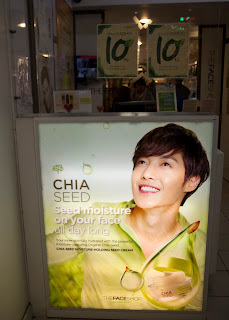 Once in the store, I was greeted by a Korean guy who asked if I needed help. I told him that I write a blog about Korean dramas and he was pretty excited saying, “Oh, you watch those sometimes!” I asked him where the cute stuff was, since that’s mainly what I’m a sucker for when it comes to Asian products, and he showed me these.

So cute! I had to get myself a kitty lotion because I can’t resist cute kitty stuff. It smells distinctly Asian, which I’m not sure why I think this, but it’s this light floral scent that I’ve found a lot of Asian products smell like. Also, it made my skin very soft, which is surprising from something packaged so cutely. Usually you sacrifice quality for cute packaging, but it seems Korean have mastered both. I browsed the facial products and found a lip mask. I’d never seen a lips mask before so I decided to give it a try, mainly because I thought it was cute too. I tried it, and it was kind of difficult to keep on my lips for the recommended 20 minutes, so I ended up getting impatient and wearing it for more like 3 minutes, but I woke up in the morning and my lips were definitely softer. I even asked the 5 year I nanny and she agreed that they were very soft. I’ve always heard that Korean skin products were the best, and now I believe it.

Then I went next door to a Korean shop named Koryo Bookstore. This place was Korean crazy magic! It had everything you could want in terms of kdrama/kpop idol gear. Just look at the mugs, posters, and even kdrama dvd rentals! 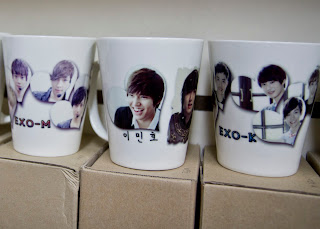 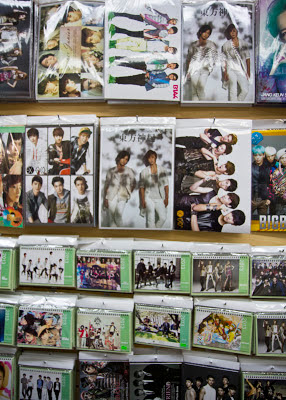 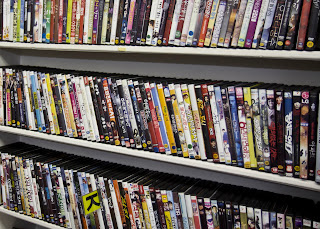 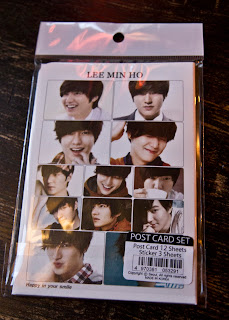 I really wanted the Lee Min Ho mug but when I saw these Lee Min Ho postcards I knew they were the better choice. I really feel like I need to share the Lee Min Ho love, so the first 3 people to message us with your address on Facebook, which there is a link to in the top right corner, will receive a special Lee Min Ho postcard and maybe even some stickers! Don’t worry, I promise not to sell your info, or send you other ridiculous solicitations, or drop in and expect you to feed me dinner (although I wouldn’t say no to an invitation). This is purely for amusement purposes only.

Luckily my friend came to meet me and I had to leave the shop before I impulsively bought anything else. I really wanted to get some Korean magazines, but didn’t have time. Next, we headed over to Mad for Chicken, an amazing Korean fried chicken place that he recommended. I took more photos along the way, trying not to embarrass him too much by looking like a crazy tourist. I saw Red Mango, a Korean frozen yogurt place, and they were playing this spinning game outside to win food. It struck me as especially Korean since they always have contests like this in kdramas. I didn’t stop to play, which I now regret. 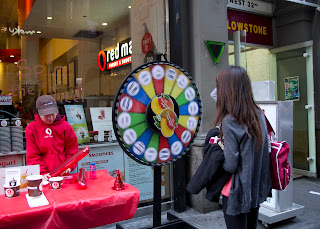 When we arrived at the Mad for Chicken, there was strangely Louis Armstrong music playing and pictures of Harlem artists on the walls. My friend was surprised at how different and Americanized it was since the last time he visited. That was kind of sad to me, but once we got the food, it didn’t seem to matter. The chicken was the best fried chicken I’ve ever had! We got soy flavored and spicy flavored and they were both awesome. They were perfectly crispy and meaty, and the flavors were distinctly Korean. We got a little carried away with the chicken, so I ended up taking it home and eating it the next day cold, which turned out to be even tastier. 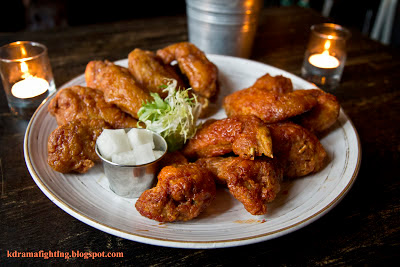 We also got a seafood pancake that was delicious. I tried my best to eat it with chopsticks, but despite my friend’s best efforts to show me on multiple occasions the proper way to use them, I was a failure. It doesn't help that Korean chopsticks are made of metal so they are even more slippery than wooden ones. He gave me permission to use my fingers, and I did, with only a little shame. 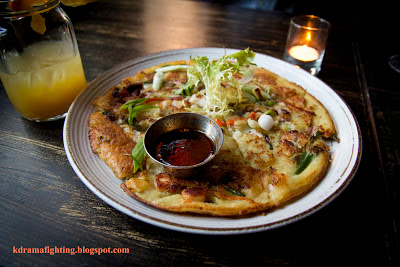 Last, we went to a really swanky Korean lounge. The atmosphere reminded me of somewhere a rich chaebol womanizer would meet girls. The mood was really chill and relaxing. The waitresses were very beautiful, and I think they could give some of the kdrama actresses a run for their money, and the bartenders were pretty hot. 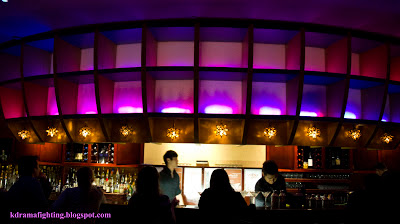 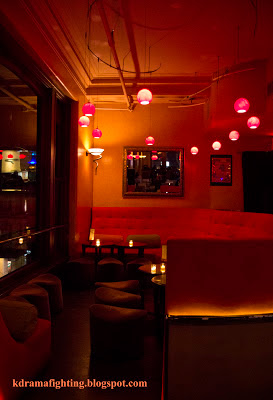 By the time we were done at the lounge, the shops were all closing so I didn’t have anymore time to go and buy things I shouldn’t be buying. I didn’t even have time to go to a Korean grocery store to buy some crazy snacks to try. I bought my mom an assortment for Christmas, which included a lot of interesting flavors, such as spicy squid, but didn’t try them myself. I’ll be heading back to Ktown soon and will write about Korean snacks later.

Hopefully this post has inspired you to seek out your own nearest Korean shops, or make a visit to NYC’s Ktown. If you ever come, let me know, and I will definitely go back to that chicken place with you! Also, are there any Korean snacks you’ve tried that you recommend? Comment below.
Labels: Coco Kim Hyun Joong korea town new york city Korean fried chicken korean skin care Koryo Bookstore Ktown new york city Mad for chicken Sea food pancake The face shop