Look at this poster:

If you love Twilight or other vampire-themed movies, you might see this and think, "Huzzah!  Finally, a k-drama that combines my love of vampires with my love of Korean television!"

Then there are people like me.  As I said in my introduction post, I never really hopped on the Twilight train, and I'm somewhat ambivalent about vampires in general.  Why does being undead make them so angsty all the time? Why are they always lounging around mansions in slightly unbuttoned shirts? Don't they get bored?  I think it's meant to play to the whole "mysteriously sexy" persona, but to me it just feels like they're trying too hard. Nobody wants to see your glowing white chest, okay?  Give me a straightforward zombie any day.  They don't try to seduce you.  They don't stare at you uncomfortably as they try to decide whether to kiss or kill you.  They just want your brains.
That's why, when I first saw the poster for Vampire Prosecutor in my Netflix suggestions, I groaned out loud. "Look!  He's a vampire!  AND a prosecutor!  Look how sexy and tormented he will be!"  K-dramas tend to lean on the broody side anyway, so imagining an extra broody hero sitting in his lair sipping blood and staring tormentedly into space for 12 episodes didn't seem all that appealing.

Then I finished watching Queen of Reversals and faced a major k-drama crisis.  I tried the first episode of 2 or 3 basic rom coms, and I just couldn't get into any of them.  That's when I remembered a friend of mine recommending this show a while ago, and I decided to give it a try for a change of pace.  So here's what I learned:

For the first few minutes, I thought, "I don't want to watch this stupid vampire show."  Then, for the first few episodes, I thought, "Hey! This is a pretty decent crime procedural! I will just watch it gradually as I eat dinner and stuff!"  And then, I don't know how or when it happened, but suddenly that sentiment morphed into "WHAT IS THIS WIZARDRY AND WHERE CAN I FIND MORE OF IT??? MORE! MOOOOOOOOORE!"

What Won Me Over

This show, despite initial appearances, isn't really about a vampire who happens to also prosecute crimes.  Instead, the focus is really heavy on the crime solving aspect of the show, and the vampire stuff is pretty peripheral for probably the first 9 episodes (and there are only 12 episodes total in the season).  In fact, I felt like Min Tae-yeon didn't even need to be a vampire in order for the show to work at first.  Sure, he could see some stuff by drinking blood, but most of the time it wasn't even useful to solving the crime. Instead, they relied on good old fashioned teamwork and ingenuity most of the time.  Some of the early episodes had obvious solutions, but the more intricate crimes in the middle episodes were really interesting.

This format worked for me because I happen to love crime shows with strong ensemble casts. It may not work for people who 1. want a ton of vampire lore (I still don't really understand much of the vampire rules in this series.  They can die by getting shot? Does sunlight not bother them?) 2. want a lot of romance, or 3. hate gore.  There is quite a bit of blood here (as well as disturbing themes like child molestation), so it's not for people who get queasy easily. I would compare this series to Bones in the sense that it is filled with witty characters, some grisly but interesting crimes, and there is some hint of romance, but it isn't the point of the entire show.
Even though I didn't care about the vampire stuff much, one of my complaints about this show was that the vampire elements were pretty fragmented at first.  We would get maybe one significant conversation about the underlying mystery each episode, but those conversations were so vague and scattered (maybe this was also a translation issue?) that I really felt like I had no idea what was happening until the last couple of episodes.  Be patient.  Everything will make sense in the end!

This is another one that took me by surprise. When Lee Young-ah showed up as Prosecutor Yoo Jung-in in episode 1, I thought,  "Great.  Another peppy-but-awkard female sidekick with a stupid bowl cut."  Don't be fooled, my friends!  This character surprised me with the many levels of her personality and her ability to convey them all persuasively just through her facial expressions.  In one episode she would be bossing around gangsters, and in the next episode she would blush naively when teased about boyfriends.  Somehow, all of the many sides of her personality worked together to create leading lady magic.  Okay, maybe it's just new-drama-love euphoria talking here, but she might be my new favorite female lead of all time.  That means more than Secret Garden's Gil Ra-Im.  Somebody pinch me.  Am I talking crazy talk?

I was surprised at how many times I laughed while watching this show.  I thought it would be straightforward and dramatic all the time, but sometimes it was outright hilarious!  The credit for the humor mostly goes to the supporting characters, Detective Hwang Soon-bum and intern Choi Dong-man (once he got rid of the crimped hair).  Their interactions with each other and with the rest of the cast were unexpectedly fun.
Even Tae-yeon had some humor to him.  Yeah, he spent a lot of his time looking cool and aloof like any good vampire would, but every once in a while a little smirk would appear and he would join in on the fun.

A Little Bit of Nitpicking

I already mentioned the fragmented vampire story and the lack of explanation on how vampires work in this world, but the other major plot holes came from the crime procedure.  Let me give you a little quiz to illustrate my point: 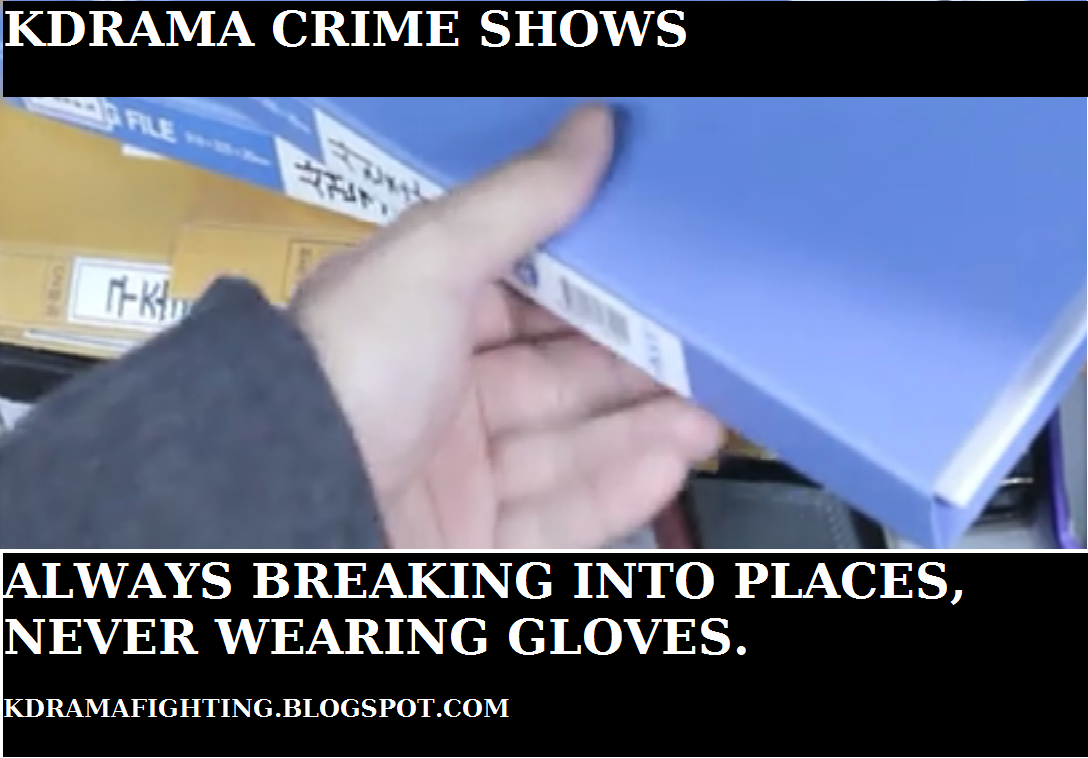 1. You are a prosecutor who wants to gain information from some thugs.  You:
A. Tell them that you are a prosecutor.  Since they don't want legal trouble, they will give you info.
OR
B. Walk up to their group antagonistically without saying anything and then hope they attack you one by one so that you can beat them all up before asking for information.

2. You have evidence that someone is a murderer.  You also happen to be a vampire.  You:
A. Get a search warrant and bring a team to find additional evidence that will be admissible in court
OR
B. Break into the house, almost strangle the suspect (who knows your face) with one-handed vampire strength, and then sneak around looking for stuff.  Oh yeah, and you don't wear gloves.

3. You have discovered the hideout of a serial killer who may or may not also be a vampire.  You:
A. Call for backup so that you can storm the place and get evidence
OR
B. Drive to the remote location by yourself and wander around with nothing but a gas gun for protection.

If you answered B to all of these questions, you are apparently qualified to be a member of Korean law enforcement!  Now, I know that Korean law and American law aren't identical, but since they mentioned things like search warrants and police brutality, I can't help but wonder why they weren't more careful in their process. If this were Law and Order, every single thing they found would be inadmissible in court!

The Verdict Is In

Overall, the only true downside to this show is that I amcompletely addicted and now have to watch the second season.  Why would I do this to myself?  I watch k-dramas for immediate closure, and now I'm stuck with this craving I can't stop for the rest of eternity--just like poor Tae-yeon.  Except at least my craving involves less blood.