It's been a while since we had a Fashion Face-off around here, so let's start by announcing the last results.  I have to admit that I was really, really surprised by this one.  In our "Hotties in Suits" competition, Cha Ji-heon from Protect the Boss won a decisive victory over the more formal suit-wearers.  Was it the Batman t-shirt?  Because if it was, I can totally get behind that.

For this week's Fashion Face-off, I'm going to go with men wearing eyeliner--also known as "guyliner." The male characters in kdramas often wear noticeable makeup (the OBVIOUS lipliner in a few dramas being the worst example), and guyliner has become something of an immediate indicator that a character is extra broody. As someone who mostly wears makeup for weddings and Halloween, I have to admit that seeing men outdoing my efforts in the makeup category is sometimes unnerving, but I've gotten to a point where I can handle it. 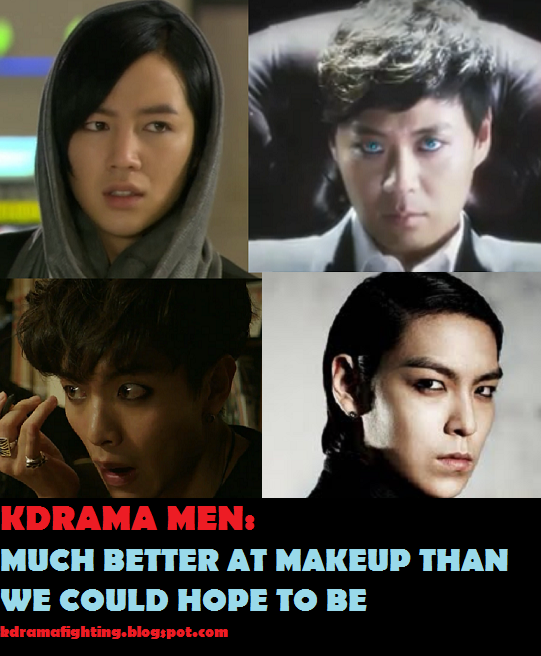 There were a lot of options in the guyliner category.  I tried to choose characters who consistently rock it as an integral part of their persona.  So, in the battle of the guyliner, who wore it best?  Or, if you don't love the guyliner, who pulls it off the most convincingly?

There is plenty of guyliner in this series, but we have to single out Joo Byung-hee because the guyliner is part of his soul.  Just read the subtitle in the screencap below:

As noted in my review of this series, the vampire elements aren't always at the forefront of the show.  That being said, the amount of guyliner on everyone's favorite blood-sucking prosecutor seems to be directly proportional to how vampire-ish he is being that day.  Does this mean that when he goes home to sulk in his fancy apartment, he stops to apply eyeliner first?


Contender #3: Hwang Tae-kyung in You're Beautiful

We get it.  You're emotionally constipated because you have a mean mom.  You're also in a band.  All of this naturally leads to a guyliner addiction.  We would do the same.

Sometimes we have to recognize that the villains are just as stylish as the good guys.  Just because T.O.P.'s character likes to kill people shouldn't invalidate his use of guyliner, okay?  In fact, maybe it makes it more justifiable.


So who wore it best?  Vote in the poll below!