Skip to main content
Labels
Posted by Unknown May 06, 2013

Kind of Like Exercise: Flower Boy Next Door Review

In order to explain my feelings about Flower Boy Next Door, allow me to make an analogy. Flower Boy Next Door is like exercise; I had a very hard time getting motivated to actually start each episode, but then once I got started it felt good, and I remembered that I actually did enjoy it. This in contrast to things like childbirth and puppies, which people think are a good idea until they do it and remember how terrible it actually is (I've never actually given childbirth or raised a puppy; they just seem like terrible ideas that people have.) Unfortunately, Flower Boy Next Door was one of those Korean Dramas that I just couldn't quite get into and struggled to finish. However, it had a lot of really great moments for me that made it mostly worth it. I typically give up on kdramas that don't make me battle with my inner 5 year old self to go to sleep over, but this drama had such a strong beginning that I felt compelled to see it through.

(Vivi's note: I also watched most of this series recently, but since I never actually managed to finish the last two episodes, I'll let Coco take this one!  I liked the series, but I got distracted with other things.  I'll add some of my observations here and there.)


Flower Boy Next Door stars the "Queen of Romantic Comedies", Park Shin-hye, as as Go Dok-mi, a young woman who becomes a recluse after a devastating event in high school makes her a social outcast. One of the only ways she connects to the outside world is by spying on her attractive neighbor across the way. She is caught in the act of peering through binoculars one day by the neighbor's cousin, Enrique Geum, a whimsical video game developer played by Yoon Shi-yoon. He decides to help her rejoin the world and open herself up to love and friendship, along with the help of three other attractive neighbors.

Reasons why FBND is worth the 16 hour investment. 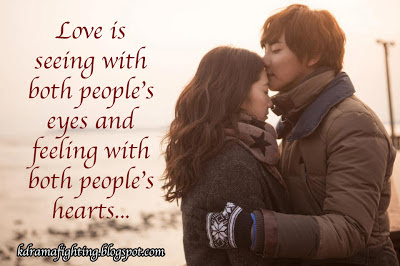 The female lead, Go Dok-mi, is an aspiring writer so we are able to listen in on her inner monologue as she writes about her experiences with coming to open her heart back up to love and being loved. She makes some beautiful observations about human relationships that make the show very touching. My favorite example of this is when she realizes that the reason that Enrique appears to be able to read her mind is because, "To that man, love is seeing with both people's eyes and feeling with both hearts, seeing the world more deeply." Once she realizes that this is what love is really all about, she can then read his thoughts as well. This moment really pulled the whole show together for me on an emotional level.

(Vivi's note: I would also like to give a shout-out to Go Dok-mi's POETIC HAIR.  Holy freaking cow. That is the best tousled hair I have ever seen in my life.  It almost made me want to become a recluse who doesn't shower.  Almost.)


Although I was not a big fan of the male lead, and was totally on the second male lead's side, he did have the gift of physical comedy going for him. There were some moments, particularly at the beginning, that made me literally LOL, and I don't use LOL loosely. I hate when people just throw out LOL's when you know that there's no way they actually laughed out loud. This drama was able to remain appealing to me because it played funny moments really well, especially thanks to the fact that several of the characters also star in Saturday Night Live Korea and other comedy shows.

(Vivi's note: The panda hat makes me super uncomfortable for some reason.)


How cute were they? So cute! The webtoon artists next door were adorable and just really good guys, not to mention totally hot. I'm not really sure why the Japanese guy existed since he kind of appeared out of nowhere, did not push the plot forward at all, and then made an odd exit, but at least he was cute and added to the number of flower boys next door. The editor of the webtoon, played by Kim Seul-gie, who also stars on SNL Korea, was super funny and I really hope I see more of her. I feel like she's the Korean Emma Stone, and I freakin love Emma Stone. And the second female lead had the best facial expressions and over the top acting that actually made her character really great. All in all I approve of the casting choices and character development of the side characters.

(Vivi: Can we petition to have Kim Seul-gie star in her own drama?  I would love to see some of that sass and physical humor in a kdrama lead!)

Reasons why FBND is not worth the 16 hour investment:

1.The 10 long, repetitive, and uninteresting episodes in the middle

Thinking back on these, I honestly can't even remember what happened. I think it was an awful lot of,
"You should leave me to go live your dream."
"No, I will never leave you, you are my dream."
"Fine I'll pretend not to love you so you will go."
"No, I won't go, jk, I will go, jk, I won't go, jk, I actually did go."
With me going, "What? Did he go or not? Just go already!"

All in all, Flower Boy Next Door had a lot to offer but just had too much time to do it in. This drama could have been a great 2 hour movie instead of a whole series. If they had cut out the unnecessary plot points and overdone scenes and just focused on the beautiful themes and character development, then it truly could have been a great drama.

I'm not a huge fan of Yoon Shi-yoon. Sometimes his man-child goofiness came off as endearing, but more often than not it came off as irritating and unattractive. I actually thought he was much hotter when he had a on serious expression than when he smiled. I need my male leads to be a bit more suave and manly. This was one of the first kdramas where I experienced no jealousy of the female lead for getting to kiss the male lead. I just really loved the second male lead so much and felt like he was a better match. I know that this drama wanted to play up the whole "opposites attract" thing, but let me just say that I once took a social psychology class, and that theory is pretty untrue. Humans actually love being with people like themselves. Hence the reason why we get so excited to run into other kdrama fans! The second male lead just seemed like a much better fit for the female lead, even though I know that the point was that he would have let her keep living the way she was living and never would have pushed her back into the world the way Enrique did.

(Vivi's note: But don't you remember how they beat the audience over the head with that nature metaphor? Something about trees?  Or wind?  And that was supposed to make us understand why Enrique was her true match?  I actually let the show convince me that Enrique was better for her, but that doesn't mean that he was better for me.  I'm sorry, but I will choose the outwardly sarcastic but inwardly thoughtful comic book designer over the hyperactive chipmunk who wears knee socks any day.)

The whole premise for the cause of her becoming an extreme recluse seemed over the top to me. Maybe I'm just not as sensitive as other people (although I'm sure Vivi would tell you differently) but it just seemed unlikely that her experience of being shunned and made fun of in high school would make an otherwise normal person become completely shut off from the world. Maybe they could have done a better job of explaining how severe her experience was to make it more believable. Mostly I just became irritated with how sullen and depressed she looked all the time for 14/16 episodes. I was like, "Get over it! You have 4 freaking hot guys being your friends/lovers. I could get over anything if that was me!" Also, the whole video-game-designer-crazy-sabotaging-fan-thing was a little weird and over the top too. Maybe it's just because I'm not a gamer, but I didn't really get it.

(Vivi's note: Her diary made the sullenness bearable for me. Sure she was terrified of everyone, but at least she had some personality inside her own head!  That's more than I can say for a lot of sad kdrama ladies.)

In conclusion, I loved Flower Boy Next Door for what it could have been. It started out so strongly and I couldn't stop watching for about the first three episodes. Then something happened and it became very tedious to watch until the last few episodes, which were funny and endearing, in which it redeemed itself.

What was your opinion of Flower Boy Next Door? Also, are there any other kdramas that were like exercise to you? Comment below.