Skip to main content
Labels
Posted by Unknown May 29, 2013 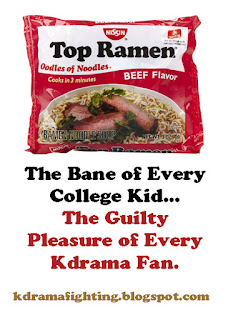 The fun Korean media news site, Soompi, recently asked Do You Know Your Korean Ramen? I shamefully had to respond that despite all the Korean ramen I have viewed being eaten on Kdramas, no, I actually did not know. The closest I had ever come to it was the infamous, cheap, Top Ramen that you usually eat when you are in college and can only spend $.25 on a meal, or when you are just too lazy to make real food (which happens more than I'd like to admit), or when you're watching a Kdrama and see them eating it and want some even though you're not actually hungry but think you can get away with eating it anyway because all the Kdrama female leads eat ridiculous amounts of food and are still thin.

But guess what? I am lucky enough to live near Ktown in NYC, so I have no excuse to be Korean ramen ignorant any longer! This weekend I decided to take the Soompi ramen challenge by sampling 5 ramens from their list. There are 10 on the list, but I just couldn't do it, ok? You try eating more than 5 ramens over a three day weekend! In order to conduct a ramen taste test you need:


1. An Assortment of Korean Ramen
Down in Ktown they have this awesome little Asian market, Hanahreum, that has an entire aisle of instant ramen. It was a ramen aficionado's dream! 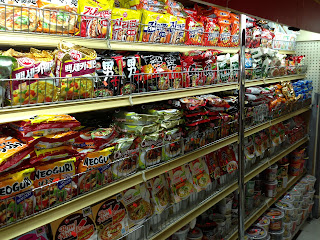 These are the 5 ramen contenders I chose for the challenge. 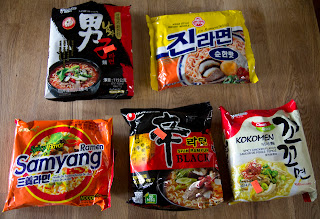 Korean ramen does not look that different than regular old Top Ramen, but I did notice some differences. The biggest difference is that Korean Ramen includes a separate package for dried vegetables to add. Here is an example of what Korean Ramen looks like uncooked. 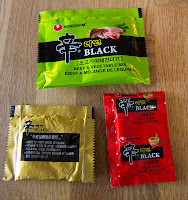 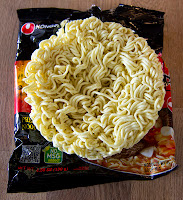 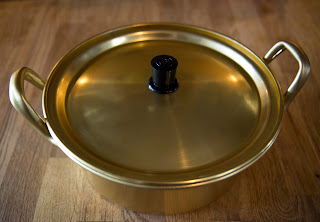 You know you've seen these beauties on kdramas and wanted one! I managed to pick one up.  The best part was that right after I made my first ramen package I sat down to watch Answer Me 1997, and look what she was making! 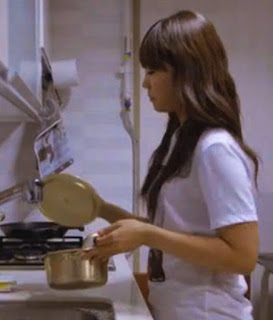 I just had to eat my ramen off the lid since Kdrama characters are always claiming who gets it. It really did taste better that way. 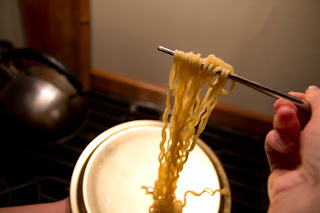 I mentioned in my last blog post about visiting Ktown that I am terrible at eating with chopsticks, particulary Korean ones because they are metal. Luckily I found some for this taste test and now I start practicing with them at home!

With all the necessary supplies ready, I began the task of determining which instant Korean ramen was the best. 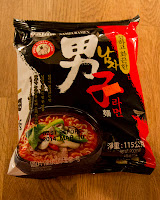 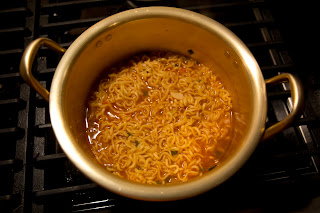 I thought this was really good Korean ramen. That being said, I have a pretty high spice tolerance. I am originally from Arizona so I grew up eating a lot of Mexican food. I would say that my spice threshold is more than the average white American, but less than the average Asian. I would give this ramen a spice rating of 4 out of 5. It made my nose run and gave me a mild lip burn, but I wasn't running around trying to find something to drink. The noodles were perfect with a good roundness and softness, and did not taste overly processed. The overall flavor was mostly just spicy, but it had a nice beefy broth. My roommate and I both went back to the ramen pot for more, only to discover that we already ate it all. 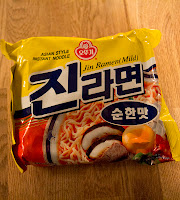 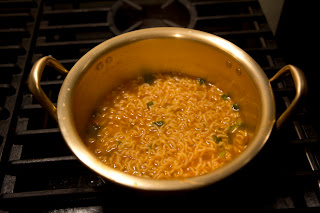 This was my last favorite ramen. It just seemed pretty bland. The overall flavor was just salty. The noodles were also kind of gummy and overly processed tasting. I would give it a 2.5 out of 5 on the spicy scale. It would still be considered spicy for a lot of white Americans. My roommate and I didn't even have the urge to finish the pot. 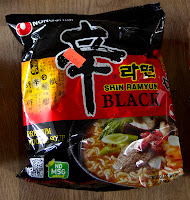 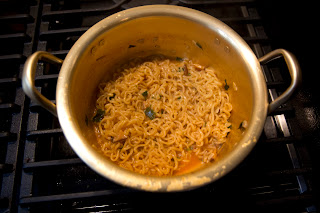 This ramen was pretty tasty. The overall flavor was mushroomy and beefy. I would give it a 3 out of 5 on the spice scale. My nose did run a little but there was no lip burn. The noodles were nice and soft without being gummy. The little packet of dried vegetables that came with it added a nice texture. Only eat this ramen if you really love mushrooms. 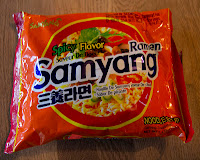 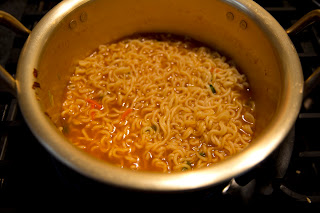 This ramen had a nice beefy flavor with a good amount of spice. I would give it a 3.5 out of 5 on the spice scale. I wanted to go back for more as I ate it. One strange downside to this ramen is that it is very orangey, so much so that it tinted my teeth orange. Gross. 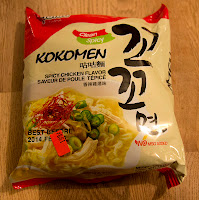 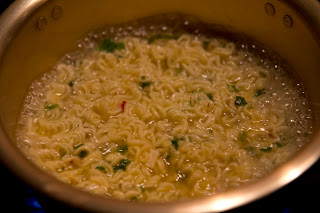 This was my favorite ramen overall. As I leaned over the pot to cook it, I whispered out loud, "Oh my gosh, that smells really good." The funny thing is that on the package the flavor is labeled as "clean" and "spicy". I was really curious to find out what "clean" tasted like, but I actually think this is a really good description for this ramen. It just looked light and fresh, and not greasy or overly processed. The noodles were nice and soft and round. It had a delightful chicken and green onion flavor. The dried vegetables you add in were very prominent, especially the green onions, but I liked that. I would give it a 3.5 out of 5 on the spice scale, which I think is perfect because spicy doesn't become the main flavor, but still plays a big part. I think this is a great choice for a kdrama fan to sample.

Hopefully this has inspired you to conduct your own Korean ramen taste test. You should try the other five on Soompi's list and let us know what you think. Have you ever tried Korean instant ramen? What are your favorites? Comment below.