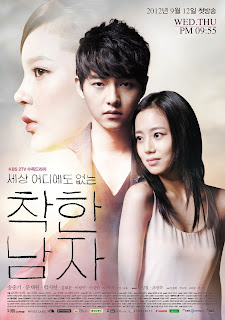 I've been trying to step out of my Kdrama comfort zone lately.  I am normally a solid rom com kind of girl, and revenge melodramas aren't really my cup of tea. Dying and crying? Blech. Give me lovesick hijinks any day.

After Sungkyunkwan Scandal, however, I really wanted to watch more from the best bromance in the world. After accidentally (completely on purpose) reading a spoiler for Yoo Ah In's Fashion King and realizing that I would really, really hate it, I was left no choice but to go with Song Joong Ki's Nice Guy (also known as Innocent Man). Unfortunately, Song Joong Ki is just leaving for military service, which means no more shows from him for a while. Why now? Just when I've developed a mild obsession!

Bottom line? I loved every single absurd, glorious, melodramatic second of it. I'm not even embarrassed. Here's the breakdown:

When a murder happens in the first 20 minutes of episode 1, you know you're in for a Kdrama ride, and this show's plot was wild with a capital WILD.  I mean, at one point in the show, one of the characters starts to recover from amnesia, and the shock of her recovery—wait for it—gives her more amnesia. Because according to Kdrama logic, what's better than amnesia? DOUBLE AMNESIA! What's better than a head injury? DOUBLE HEAD INJURY! What's better than blackmailing? DOUBLE BLACKMAILING! You get the picture.

To be honest, the plot wasn't what really won me over because it wasn't that great. If you want to know why I temporarily stopped sleeping or showering and had some intense marathons with this show, here's the answer:

In my experience, most kdramas tend to be external.  What I mean by that is that exterior events incite change in the characters, and that change is manifested in outward action.  For example, a woman gets slightly cold and then—in a twist of fate—faints. We then know that the man has developed feelings for her because he carries her home and watches over her all night long.

As I just said, Nice Guy has a lot of external stuff happening, but at its core, it's actually an intensely internal show.  Even when Kang Ma Roo makes the outward gestures typical in drama romances, we can never be sure if it's sincere or not—because he doesn't even know if he's being sincere. His character goes beyond the usual  "I love you, but I'm also conflicted because I'm angry/guilty" conflict into something more complex, and Song Joong Ki does an incredible job portraying the character. Half of the time, I wasn't sure if I should be swooning or swearing at the computer because Joong Ki's Ma Roo is so flawed and messy and confused. That internal tension is what made this drama so engaging.

For the first five episodes or so, Moon Chae Won also holds her own as Seo Eun Gi.  Sure, she's a little bit abrasive, but she's also confident and powerful.  We all know how much I love that in a female lead!  Unfortunately, Moon Chae Won doesn't get much to do for the second half of the series once her character gets turned into an amnesiac plot device.  The show is really all about Kang Ma Roo, but I saw just enough of Moon Chae Won's abilities as an actress to make me wish they had used her a little bit better here.

And then we come to the character who made me angrier than any other Kdrama villain has ever made me in my entire life: Han Jae Hee (Park Si Yeon).  I think what made her so upsetting was that she wasn't just horrible for the sake of being a terrible person.  She was an exaggerated version of someone you could meet in real life.  She was manipulative and selfish, but not out of some unreasonable desire to ruin other people's lives.  Instead, she's a Daisy Buchanan: beautiful and alluring, but completely self-absorbed.  She wants everything, but she doesn't want to sacrifice anything. She's so self-absorbed, in fact, that every time she talks about Kang Ma Roo, she says something to the effect of "that man who I loved more than my own life" without realizing that he's exactly the opposite. She didn't love him more than her own life; she didn't even love him more than her own job!  Really? You need to commit suicide if you can't be a journalist? There are no other careers out there that you could do so that your boyfriend doesn't have to go to prison and become a gigolo?

Other Things about This Show

Is it just me, or were the music choices for this show a little off sometimes?  I almost stopped halfway through episode 1 because, while I can handle dramatic murders and cover-ups, the over-the-top soap opera tango music was just too much.  You shouldn't be busting out the murder accordions (murdercordions?) until at least episode four!  I also recall one scene where two people were blackmailing each other at a cafe (I can't remember who it was because basically everyone blackmailed everyone else during the course of the show), and Jason Mraz was playing.  How are you supposed to drive fear into your opponent's heart with "I Won't Give Up"—possibly the most mellow song on the entire planet—playing in the background?

(Spoilers) Can we have a little heart-to heart about episode 20 for a second? I know that a lot of people just hated it outright, but I'm kind of torn.  Sure, it was tonally inconsistent with the rest of the show.  It was also kind of confusing and didn't mention anything about what happened to Tae San.  I mean, I didn't really care for most of the office politics throughout the show, but after 20 episodes of shouting WHAT'S GONNA HAPPEN TO TAE SAN???????, the writers should have included something about it.

The one thing that saved that ending for me was the relationship between Ma Roo and Eun Gi.  Throughout the show, Kang Ma Roo's obsession was his need to save the women in his life. His love for Jae Hee, Choco, and Eun Gi all grows out of his ability to protect them when they are vulnerable or helpless.  Because Eun Gi is a helpless amnesiac for over half of the show (Can you tell I'm a little miffed about this?), I wasn't ever entirely sure if Ma Roo could love her once she no longer relied on him. Even at the end of episode 19, he gets stabbed, and his primary concern is sending her off before she can notice. (Wait, how did she not notice that gigantic blood stain on his stomach?) Episode 20 resolved that issue for me.  Even if it was inconsistent with the rest of the show, I needed to see that he could love her without always having to save her.  They built a relationship on friendship and respect, not on an attraction that grew out of pity or guilt.

Song Joong Ki is awesome. Watch this show immediately. Don't let the murdercordions deter you. #...something clever. Aw, forget it. I don't understand how to use hashtags. Just watch this show.